Konami has announced that work has started on a new Busou Shinki game.

Busou Shinki started as an action figure line in 2006, and garnered a large following which resulted in several manga and novel spinoffs, two anime series (one OVA and one TV series), and four video games (the online game Battle Rondo for the PC, action games Battle Masters and Battle Masters Mk 2 for the PSP, and Battle Communication for mobile). Though the series had been in hibernation for several years since the TV anime concluded in 2012, the restarting of the series was announced at the end of 2017, and Konami released further details on 19th February 2018.

According to the press release, Kadokawa will be handling comics and other merchandise, Kotobukiya will be releasing collaboration model kits with their Megami Device line, and Konami will be working on a new video game. While further details such as genre and platform have not yet been announced, it was mentioned at the Wonder Festival Winter 2018 talk show that it would be handled by staff who had worked on the previous games. 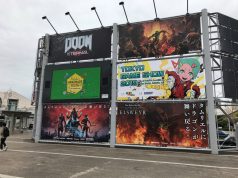