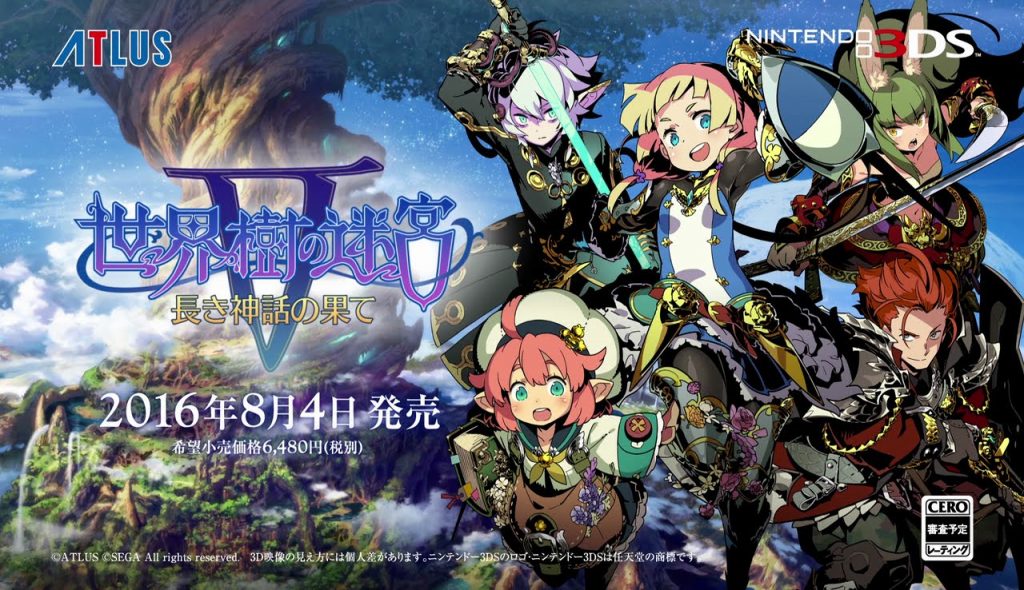 The Sekaiju no Meikyuu series (localised as Etrian Odyssey in the west), commonly referred to as “SQ” in Japan, began on the Nintendo DS in 2007, and felt outdated even then, being a game of a dying genre- A traditional Wizardry-like 3D first-person dungeon RPG- With a punishing difficulty level that went against the zeitgeist of making games progressively easier and more accessible to casual players.

However, its deep battle system, freedom of choice in character and party building, fantastic retro soundtrack, original idea of incorporating drawing maps of the dungeons you explore into the game itself, and unique setting gained it a staunch following, and as of September 2017 the series has seen the release of five main instalments, two remakes, and three spinoffs.  Sekaiju no Meikyuu V: Nagaki Shinwa no Hate/Etrian Odyssey V: Beyond the Myth is the fifth game in the main series, released in 2012 four years after IV (though 2013 and 2014 saw remakes of the first two games and one spinoff, and another spinoff, albeit of a different genre, was released in 2015) and can be said to be a massive improvement over previous instalments in virtually all ways.

The game is very much a case of more of the same: The player arrives at a town near to a massive world-tree (the titular sekaiju) – which also serves as a massive labyrinth which draws adventurers seeking fame, fortune and glory from all over the world – forms a party of five adventurers to explore the labyrinth.

All player characters are completely silent aside from yells and grunts (which can be turned off, if the player so wishes), encouraging the player to fill in the gaps with their imagination, and what little story there is is best described as “unintrusive”. While in a dungeon the bottom screen of the 3DS perpetually displays a map of the floor the player is in, and as is the series tradition, the player has to draw the map in themselves. While people unaware of the series tend to be sceptical of this feature, the fact that this is the eighth game to include it speaks volumes- The map-drawing is in fact quite fun.

The player is generally left to their own devices as they climb the tree, divided into dozens of floors, while taking on optional quests. This is far more entertaining than it sounds, due to interesting gimmicks, challenging enemies, and massive leeway for character customisation. As with other games in the series and similar to Atlus’ flagship Shin Megami Tensei series, the difficulty level is noticeably higher than most contemporary games, and many of the later bosses require a thorough understanding of the game’s mechanics and prior planning if the player is to stand a chance.

SQ5 takes place in an entirely new setting and has a completely new set of character classes. The game also introduces the concept of races (while 4 did technically have different races in the lore, they amounted to nothing gameplay-wise): When creating a character, the player chooses from one of four races- Earthruns (regular humans), Lunaria (elf equivalents, localised as “Celestrians” in the English release), Therians (beastmen, but far closer to human than IV’s), and Brownies (dwarf or hobbit equivalents)- Which determines which job class they can start in, their base stats, and a skill tree separate from the job-specific one, also a new addition in 5. The game allows the player to respec and change classes liberally, however, which means that a character’s starting class ultimately does not matter all that much, and thus some might feel that the fact that the character’s portrait is determined by their starting class is a much more cumbersome limitation.

Also new (and replacing 4’s subclasses and the remakes’ grimoires) is the concept of “aliases” (localised as “Legendary Titles” in the English release)- Midway through the game, the ability to assign characters aliases after they reach a certain level. The player selects from one of two options, and unlocks an entirely different second half of the class-specific skill tree depending on which is chosen (respeccing also allows the player to choose again so the other skill tree is not permanently locked out; It just cannot be used while the character is using the other).

The alias also replaces the character’s job class, and can be renamed at any time- While this may be a purely cosmetic feature, it lends greatly to customisation, allowing the player to make their characters more unique, especially when combined with the other new cosmetic customisation features- Namely the ability to change characters’ skin, hair and eye colours, and to give characters one of 40 different voices (20 for each gender, and including big names like Ishida Akira, Toriumi Kousuke, Tanaka Atsuko, and Horie Yui). Unfortunately, there is no option to change the colours of characters clothes.

The game also incorporates many of the quality-of-life upgrades such as the ability to speed up movement in dungeons, hasten battle animations, and to enable limited auto-mapping from the remakes of the first two games released in the years since 4, making the experience far more fluid than before. 5 has no equivalent to the hot air balloon and overworld of 4 and seafaring of 3, returning to the series’ roots of having a single massive dungeon, but this arguably leads to a far more focused and streamlined experience. The soundtrack is also outstanding, in particular the boss themes Ikusaba: Sora wa Nari, Chi wa Sakete and Ikusaba: Hoshi no Shiren, and yet another remix of the ever-popular Senran: Arekuruu Harou no Hate.

The game is not without its flaws: While story has never been the series’ strong point, 5’s is particularly shoddy in its execution- The third area has its own self-contained story involving two NPCs who do little elsewhere, and the final boss is something that you never even hear of until right before confronting it. And though this could in fact be considered a tradition of the series, the post-game area and boss leap firmly into the territory of sheer masochism with their difficulty. Thankfully, none of these come any close to outweighing the game’s many strengths, and some may even argue that the post-game’s difficulty jump is in fact a good thing.

The Good: One of the best Wizardry-like 3D dungeon RPGs with all the bells and whistles of a modern video game, with fantastic gameplay and lots of character customisation.

The Bad: The narrative is particularly weak even by the standards of a series known for weak narratives.

Conclusion: Sekaiju no Meikyuu V is a very strong entry in not just its series, but the genre itself. Though it has a weak narrative even when judged by the standards of a series known for weak narratives, it more than makes up for this by having extremely strong gameplay and the greatest amount of customisation options yet. The new setting, streamlined systems, and lower difficulty level which allows the player to retry once after a game over also means that it is fully accessible to new players.