The latest game in the Phantasy Star series, Idola: Phantasy Star Saga, was announced for iOS and Android earlier this week. The game is being worked on by staff from previous games, and the latest issue of Famitsu includes an interview with director Chin Tomomasa and producer Tanaka Shuntaro regarding the game.

The interview starts with Tanaka saying that although the Phantasy Star series is celebrating its 30th anniversary this year, the only games they currently have available are Phantasy Star Online 2 and PSO2es. This was because they put all their power into PSO2 as a flagship title, but they came to think that for the series to go on they would need to make a new game with new qualities, and he and Chin came up with the proposal for what would become Idola.

When asked about the title, Tanaka says that Idola is another name for Dark Falz, and that though the setting of Idola is largely different from previous titles, it is a story about people standing against Dark Falz and its minions, and that is where they drew the title from. Chin adds that “IDOLA” is also used as the title for a BGM used in the PSO series for battles against Dark Falz-related enemies.

Tanaka says that the world of Idola involves a clash between two factions, Law and Chaos, and that the game’s catchphrase of “choose fate” is related to this; The player being able to choose the characters’ fates is a large aspect of the game.

The interviewer asks about what will happen with Chin’s involvement in PSO2es, and he says that he and several other staff members have moved from the PSO2es team to the Idola team, and that they have already handed over the management of PSO2es to the new team. Tanaka says that because of Chin’s involvement starting up the Idola project and his experience with PSO2es in a directorial position, they had him be director for Idola as well, and that they had begun the handover process two years prior so that there would be no problems with the running of PSO2es. Chin has spent the last year mostly supervising while the current director ran things, and things have been going smoothly. It is added that Idola is being created on an entirely different development line from PSO2, meaning that work on it will have no effect on PSO2.

How PSO2 and PSO2es are closely related is brought up, and the interviewer inquires about how Idola will be placed in the series. Tanaka says that PSO2 and PSO2es having the same setting and characters meant that there was a high hurdle for players who had not played PSO2 getting into PSO2es. Idola was made with the intention of making a game that would be easy for people who had not played PSO2 to get into. That being said, they left in the shared parts of the series, as well as its core elements, and are attempting to make it so that both new players and series fans will enjoy it, and Chin adds that they hope that this will also bring back players who have left PSO2 and PSO2es. He also says that though they cannot yet reveal the details, Idola will have connections to PSO2 and PSO2es in its own ways, with Tanaka saying that the pre-registration bonus character being Quna from PSO2 is one such connection. The interviewer asks if she is not just a collaboration character, and Tanaka says that while the world Idola takes place on is one of swords and magic entirely different from PSO2’s Oracle, it is not entirely unconnected to it. He says that players will immediately find that it is in fact a Phantasy Star title, and that things like the Rappy-type enemies and one of the characters having a Mag-like thing accompanying him are not just things that they included because the game has Phantasy Star in its title.

Tanaka says that the gameplay is a return to the series’ roots, with turn-based battles and exploring a map. It is mostly a single player game aside from special events like the Idola Battles, but they are also planning multiplayer elements similar to those that other recent smartphone games have. The game itself is free, and will include paid gacha (random chances for players to obtain characters), but it will be possible to upgrade any character to the highest rarity, and the new characters can also be obtained from gameplay itself, making it so that players will be able to obtain strong characters without using the gacha.

They go on to discuss the battle system: Chin says that each character has an assigned element, and an “element level” that goes up with each attack, and the level determines what moves the characters can use. Additionally, characters are also assigned classes, generally with Law having defense-centric and Chaos having offense-centric ones. Tanaka adds that they also put effort into making animations look smooth and impressive, and that while the battles are turn-based, they hope to make the action as good as PSO2’s. Battles against Idola are different from regular battles in that the player has to destroy parts of the enemy to disable it, and then attack its core in order to actually damage it, similar to PSO2’s Dark Falz battles. There will also be another aspect to Idola battles, but they are not yet to ready to reveal it.

The interview concludes with Chin saying that though the game may look orthodox at a first glace, they are implementing innovative systems that they are not yet revealing, and Tanaka saying that as a 30th anniversary title, they hope to make Idola a good old-fashioned RPG that returns to the series’ roots, that uses traditional RPG styles in a large-scale title, and that it will be a title worthy of bearing Sega’s logo matching previous titles in the series that will not disappoint.

Idola: Phantasy Star Saga will be released in Japan for iOS and Android in 2018. 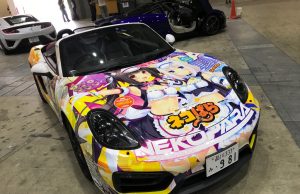