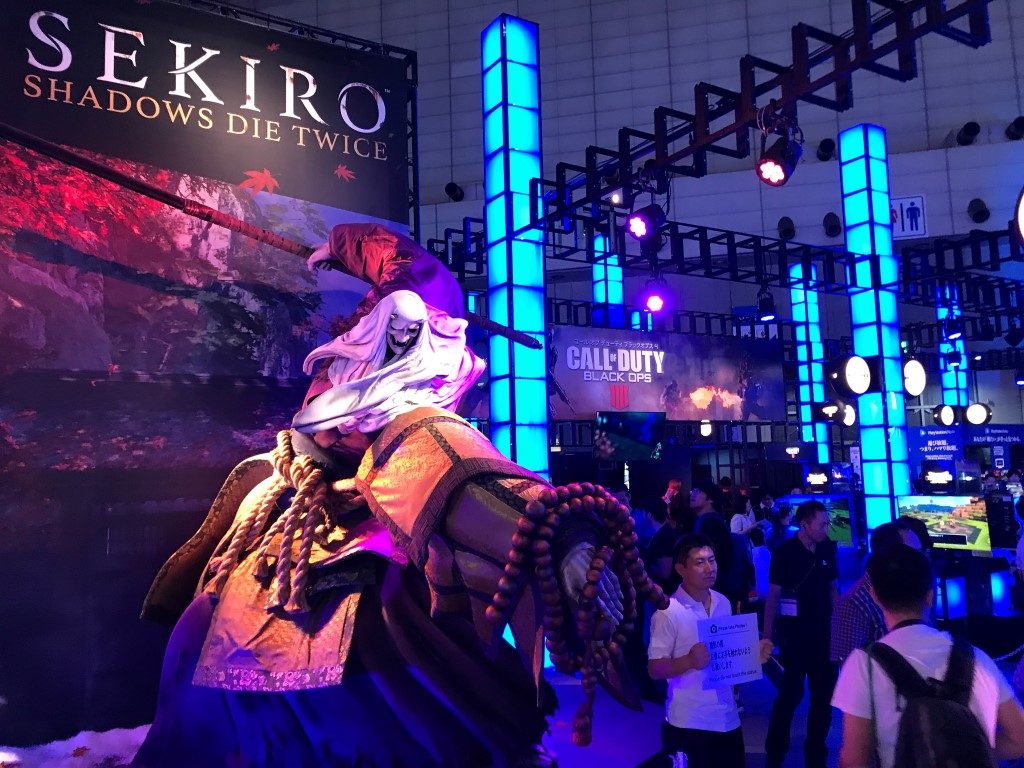 The demo starts the player off at a castle atop a snowy mountain filled with wandering samurai enemies, and is immediately forced to learn of the L2’s buttons grappling hook, which allows them to zip virtually instantly to the point they are grappling to, which feels similar to Batman’s grappling hook from the Arkham series. Unlike the Arkham series, however, using the grappling hook does not always bring the player to a safe spot, as there are sometimes enemies lurking nearby. The player character also has the ability to instant kill weaker enemies from above, also similar to the Arkham series, but as grappling does not restrict the player to a fixed spot and due to the player’s ability to jump, there is a far wider ranger of freedom than anything in the Arkham or Souls series. While all of this is clearly derived from the Tenchu series that the game was initially planned to be a part of, it does a great job of incorporating elements from more recent games to streamline the experience.

Combat is very similar in speed and tempo to Bloodborne’s, but the player character having far more movement options seems to be balanced out by making them far frailer. While blocking is not entirely removed like in Bloodborne, the enemies now have unblockable attacks, and this actually seems to make the game tougher for players who rely on blocking, as it might turn them complacent and open to these. Thankfully, these unblockable attacks are telegraphed with the kanji for danger flashing above the player character’s head.

After traversing the outskirts of the castle and a huge ravine (with a surprise giant snake that surprised us from behind), the player reaches a bridge covered in autumn leaves where they confront the boss, a towering Buddhist nun twice the player character’s height, armed with a naginata that is even longer than she is tall, clad in gorgeous flowing robes and wearing a Hannya mask. Her first phase is simple enough, with slow but wide-reaching strokes with her naginata trailing autumn leaves (it should be noted that this seemed to be an effect attached to the weapon itself, however; She was not actually kicking up the leaves on the ground), which should feel very familiar to players of the Souls series. What is new, however, is how bosses now seem to have their different phases more clearly defined: The boss had three pips above her life bar showing that she had multiple life bars, and when her first was depleted it immediately filled up again and she switched to a new phase, filling the arena with fog and making it impossible to see her, and then striking at the player from all directions. This continued for a bit, and we evaded the attacks by constantly grappling across the arena, until the fog faded and the boss reverted to the previous move set. Unfortunately we were unable to get past the second life bar in the demo, possibly due to our having not had the time to fully understand the other options available to the player (namely the ninja tools mapped to the R2 button and the items. We also later realised that there was a move mapped to L1+R1 that we never tried).

Though From Software has in interviews stressed that Sekiro is not meant to be part of the Souls series, comparisons are bound to be made, and while Sekiro does do a lot of new things, it is still clearly highly influenced by those games in both gameplay and aesthetic (what with the giant text on the screen when activating a checkpoint, dying, or reviving, the area introductions, and even the design of the checkpoints look like something out of Dark Souls). Nevertheless, it does depart from those games with enough new elements that it is, while influenced by those games, also clearly its own, new, separate thing. That being said, given how fans consider Bloodborne to be part of the Souls series, it seems apparent that Sekiro is close enough that they will consider it to fall under that banner as well, and from what we have seen, they will definitely not be disappointed.

Updated 2018/9/20 23:30 JST: The article previously stated that the boss had four pips above its life bar- This is incorrect, it had three. The error has been corrected.