The latest issue of Dengeki Playstation includes an interview regarding Square Enix’s Front Mission series survival game Left Alive, with director Nabeshima Toshifumi. Nabeshima formerly worked on the Armored Core series at From Software, serving as director for the first title and producer for numerous sequels.

The interview begins with Nabeshima being asked about how work on Left Alive began. He says that when he first joined Square Enix, producer Hashimoto Shinji had been talking about wanting to make a new Front Mission game, and as Nabeshima had previously mostly worked on mecha games like Armored Core, the project started with him on it.

They initially considered making a tactical simulation game like previous Front Mission titles, but Nabeshima had mostly worked on action games and had little know-how regarding the genre, and since the majority of staff members involved with the project were different from previous Front Mission titles, they proposed making a game that would be new and different from previous ones, and Hashimoto agreed to let him do as he pleased.

Left Alive thus became an action game which keeps Front Mission-like elements, which Nabeshima defines as the theme of war, and how there is heavy emphasis on the characters and story, showing war from the point of view of individuals. He says that this is why the game focuses on characters more than mecha.

The interviewer points out that many players, upon hearing that Nabeshima was working on a new Front Mission-related game, would have imagined that it would be a robot game, and asks Nabeshima if he had considered this while working on the game. Nabeshima says that if he focused on the robots, the story and characters would be left behind, and while that would be a Nabeshima game, it would not be a Front Mission game. He says that while they did not put Front Mission in the title due to convey how it has different gameplay, it is still a part of the world and timeline.

Nabeshima is next asked about why there are three protagonists. He says that Front Mission stories are typically not as simple as being about fighting an invading force; There are always twists. They begin from the point of view of individuals, and it turns out that armies, countries and corporations above were plotting things and that is where the individuals’ troubles stemmed from. He wanted to keep this sort of story with Left Alive, but having survival as a main theme meant being unable to include a large cast of characters. By having multiple protagonists there could be more characters involved, and he felt that having multiple characters with their own problems that gradually intertwine into one was Front Mission-like.

The interview moves on to talk about the game’s difficulty level. Nabeshima says that they purposely made the early parts of the game harder, saying that this was to have the player understand the situation they are put in, and that the game is not a shooter where you are supposed to defeat all enemies. He also says that saving survivors not having any obvious merits for the player was also a conscious decision, as he felt that it would not be right to have players save people just to get rewards. The lack of obvious merits was to make it so that the choice and motive would be entirely up to the player.

When it comes to the visuals, Nabeshima says that while the final game has a lot of corpses lying around, he was unable to fully express himself due to regulations and moral issues, and says that he wanted to have more “extreme” depictions.

Music was handled by the Front Mission series’ Iwasaki Hidenori, and Nabeshima says that because the game did not have Front Mission in the title, he had Iwasaki focus on making tracks that sounded very much like Front Mission music, and that resulted in some which sounded like arranged versions of tracks from Front Mission 3 and 5.

Nabeshima next goes on to talk about the Wanzer mechs. He says that Wanzers traditionally had an industrial machine-like impression to them, and wanted designs that built on this. Another thing that he wanted was having the tires used in the dashes exposed, and having a gimmick where the legs would transform slightly to have the tires touch the ground. They also prioritised the Wanzers having gimmicks that would look interesting from behind, as this is where the camera is placed during gameplay, and the tires coming out from behind the legs was part of this. He also says that he enjoys looking at machines, such as in factories, at work, and that they purposely went with more low-tech designs in Left Alive as a result of prioritising cooler visuals.

The new Wanzer, the Volk. was designed by Yanase Takayuki based on an order with the concept of “like a Wanzer, but not”, and Nabeshima says that he is satisfied with the final result: The Volk is clearly different from other Wanzers, but when its attachments are removed, it has a square-like silhouette like other Wanzers.

The interviewer asks if Wanzers can be defeated on foot, and Nabeshima says that the player can even defeat a Wanzer with a melee weapon such as a metal pipe if they want to; There was no real reason to leave this in, but they did so as a sort of challenge element for players.

Nabeshima is next asked what sort of game he would like to make if he could do another one in the Front Mission universe, and he says that he would next like to give a tactical simulation a try. He took a different approach with Left Alive, but if he had the chance would like to try making a traditional Front Mission. He is afraid, however, that this would be difficult from a business perspective due to his career, and that if he were to work on such a game it would require far more planning than Left Alive; He says that he would like to make a game that both old and new players would enjoy, combining traditional elements with new ones.

The interview ends with Nabeshima saying that Left Alive may be hard to understand, being neither a shooter nor a stealth game, and he hopes that players will be able to enjoy the process of clearing the game. 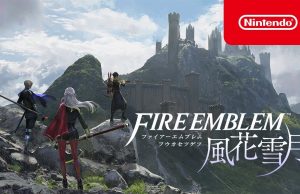