Sega Games has announced that a new Japanese version of PS4 game Judge Eyes: Shinigami no Yuigon (scheduled for released in the west in June 2019) will be released on 18th July 2019.

Though the game was originally released in Japan in December 2018, sales of both physical and digital versions were halted when actor Pierre Taki, who plays the character Hayama Kyouhei in the game, was arrested in March 2019 for cocaine usage.

The new version of the game replaces Hayama’s character model and voice: 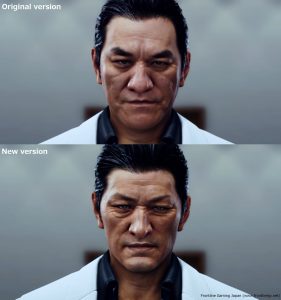 In addition to the changes to Hayama, the new version also includes balance changes made to the game post-release via updates, the “extra easy” mode which has simplified command inputs for battles, and the DLC item packs “rookie detective pack”, “truth discovery pack”, “drone racer support pack”, “sage support pack” and “master detective support pack”. The price of the game will also be reduced, to 4540 yen (before tax).

Sega has confirmed that save data from the original version cannot be used with the new version.

Additionally, in response to fans’ inquiries on whether the old version will be patched to replace Hayama’s model and voice on Twitter, producer Satou Daisuke has stated that this will not be the case, meaning that it will still be possible to play the game with Pierre Taki’s performance in it if one has the old version.

While it has been confirmed that the worldwide release of Judgment will have Pierre Taki’s likeness and voice replaced, there have been no statements yet on whether it will include other content in the new Japanese version.