Sony Interactive Entertainment has released a new trailer for Kojima Productions’ Death Stranding which, despite being nearly nine minutes long and showing off a large amount of new footage pertaining to the story, remains as mysterious as before.

With director Hideo Kojima himself handling the game’s story, however, it seems inevitable that there may be details, however slight, lost in the translation to English, and indeed one may glean additional facts from the Japanese subtitles of the trailer (where the dialogue is in English).

Frontline Gaming Japan’s professional translators took a look at the trailer and put together some such additional details here: 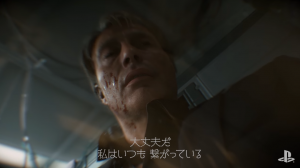 “I will always be with you”

The subtitles in Japanese here read “I will always be connected (to you)”. Though this may not seem to be much of a difference at first, the word “connected” recurs constantly throughout the trailer and may be more important than it seems. 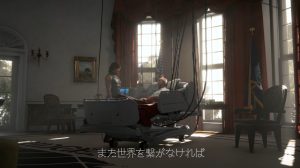 “If we don’t all come together…”

Like with the previous line, the Japanese subtitles use the word “connect” here, with the line being “If the world isn’t reconnected…” 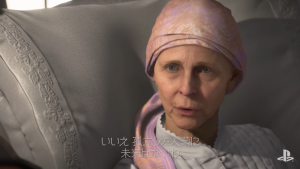 “Alone we have no future.”

The subtitles indicate that “alone” is referring not to a specific group, but to all of mankind– “With mankind isolated/detached, there is no future”. 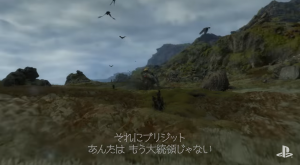 This line is “you’re no longer president” in the subtitles. Though a seemingly innocuous difference, one might infer that she still holds office in the dialogue, while the subtitles say that she no longer does. 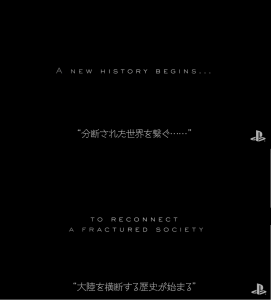 The subtitles here reads “a new transcontinental history begins / to connect a fractured world”, suggesting that Sam’s journey might have him travel from one side of the continent to the other. 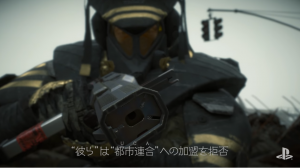 “They want the UCA to leave them be.”

The subtitles read “they refuse to join the UCA”, with “UCA” being furigana over “alliance of cities”, indicating that UCA is possibly an acronym for “United City Alliance”, or if aiming to be a successor to the USA perhaps “United Cities of America”. 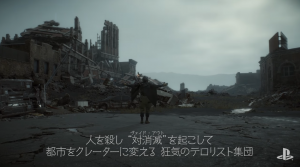 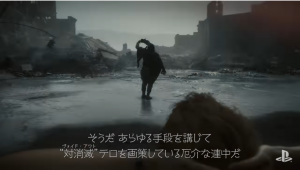 “Right, nothing’s off-limits for them, not even engineering void-outs.”

There is a stark difference here: The subtitles for the first line read “An insane terrorist group that kills people and causes void-outs, turning towns into craters”, establishing cause-and-effect between the void-outs and craters.

The second line is even more different, reading “Right, they’re a nasty bunch that uses whatever means they can to cause void-out terror attacks“; While the dialogue makes it sound like void-outs are one of their tools in terrorism, the subtitles make it clear that causing void-outs are in fact their goal.

Additionaly, “void-out” is further explained in the Japanese subtitles, being furigana over the Japanese word for annihilation in the context of particle physics, indicating two things colliding resulting in both being destroyed. 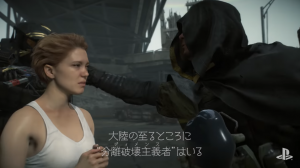 The subtitles read “there are Demens all over the the continent”, with Demens being furigana over a made-up word meaning “people who advocate seperation and destruction“. 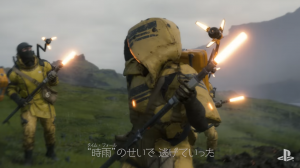 The subtitles refer to the rain as the “Timefall”, which is furigana over Japanese for “time rain” (which can also be a Japanese word for sudden short bursts of rain in autumn and winter). 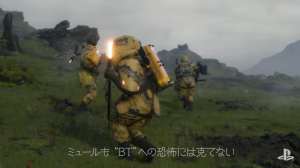 “Even they know better than to mess with BTs.”

The subtitles give the enemies a name here, reading “not even the Mules can overcome fear of the BTs”. 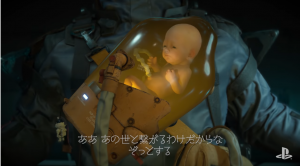 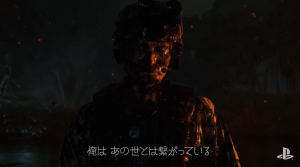 The Japanese word used for “the other side” is “the other world”, which in Japanese is a common euphemism for the afterlife or the world of the dead. 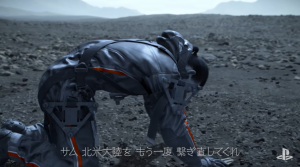 “Sam, we want you to go west, and finish what Emily started.”

This line is completely different, with entirely different details, in Japanese and English. The Japanese subtitles read “Sam, we want you to reconnect the North American continent“, with no mention of Amelie or heading west, but indicating that reconnecting the continent is “what Amelie started”. 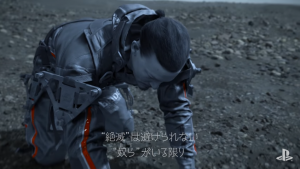 “As long as they’re still around, there’s no escaping it.”

The subtitles read “As long as they’re still around, there’s no escaping extinction“, making it clear what “it” means.

Additionally, the version of the trailer with Japanese voices includes exclusive footage of what seems to be a boss battle not seen in the English trailer, at the 6:05 mark.

Though the Japanese subtitles may not shed much light on Death Stranding’s plot, they do include or explain several keywords that seem to be relatively important, and indicate that the goal of the player will probably be to cross the American continent from east to west in order to “reconnect” it, so as to prevent the extinction of mankind.

Death Stranding will be released for the PS4 on 8th November 2019.