This article includes spoilers for all of Nihon Falcom’s Kiseki (Trails) series, including games not released in English

Nihon Falcom and Dengeki Online held a 2-hour-long talk show to commemorate the 15th anniversary of the Kiseki (Trails) series at the Tokyo Anime Center in Ichigaya, Tokyo on 29th June 2019, in which Falcom president Kondou Toshihiro and other guests including Nonaka Ai, who voices Trails of Cold Steel’s Towa Herschel, and Dengeki Playstation writers Someya Hiroto and Junki looked back at the series up till now, and discussed its future.

When looking back at previous games, Kondou commented on various things:
Trails in the Sky was originally written with protagonists Estelle and Joshua’s genders reversed. They started work on the first game in 2001 but as of 2004 were only halfway through development, and were told to release it as it was. Although a preview trailer for the next chapter was included in the game, they did not actually know for sure if they would be able to make the sequel at that point, as it depended on sales.

The plans for the Erebonia chapter were already thought up when they were working on Trails in the Sky SC, and they had originally planned to go straight to it after Trails in the Sky 3rd, but this changed when they decided that they ought to depict Erebonia as seen from the outside first, which led to Zero no Kiseki and Ao no Kiseki being made.

Zero was Falcom’s first real step into making a game not primarily for PC, and many of the changes that they made did not sit well with the staff, but ultimately it sold well and was a deciding factor in how the Kiseki series would go on in the future.

The Erebonia chapter was at first planned to have the protagonists as actual soldiers in the military, but Kondou says that they felt that this was not appropriate for an RPG due to how it put limitations on the characters’ movements and the story, which resulted in them coming up with Thors Military Academy. Kondou also mentions a time at an event in Hong Kong where a woman cosplaying as Crow asked him in Japanese to bring Crow back to life.

They were initially unsure if Cold Steel would end at 3 or 4, but when they looked at the amount of content the series would need to handle before its conclusion, they found that it would not fit into one game, leading to there being four games.

When looking back at Cold Steel 4, Kondou also says that the format for the ending- The player having to see the regular ending before unlocking the true ending- Is actually foreshadowing something to be brought up in the story in the future.

Kondou says that with the conclusion of the Erebonia chapter, the story of the Kiseki series is 60% done. Furthermore, while things up to the Erebonia had been planned to some extent while they were working on Trails in the Sky, everything that comes next is completely uncharted territory.

A Q&A session with Kondou using questions taken from users by Dengeki Online is held as well.

The first question is regarding when the next game in the series will be released. Kondou says that aside from the sequel, Falcom intends on releasing “something” that will cover content in the Cold Steel series that they could not fit into the four games, and that they are hoping to be able to release information on this within the year.

The next question is about whether Falcom already has the characters of the seven Anguis (Snake Apostles) fully thought up, and Kondou’s reply is that while they do have the characters done to some degree, which is necessary for foreshadowing such as having Vita Clotilde appearing in Trails in the Sky 3rd, they do make changes and adjustments during development of the games.

Kondou is next asked about why each chapter of the Trails series has different protagonists, and he says that this is because one of the themes of the series is growth, and when characters have grown to some degree it becomes more appropriate to have new ones who have more room for growth. It also allows for new players to come in to the series more easily- Kondou says that he is sure that there are many fans who started on Zero or Cold Steel- And because the story shifts to different parts of the world they can also change the characters to ones who are in a position to better fit into the story.

Kondou also says that since the protagonists up to this point were mostly close to positions of authority, it may be interesting for the games taking place in the eastern part of the continent to go in the opposite direction (when pressed on this he says that they have already decided on what the protagonists will be like, and suggests that this is what they have already decided on).

Whether previous Trails games will be released on the PS4 or get Evolution versions is asked, and Kondou says that they too want fans to be able to go back to older games whenever they want, that they have been quietly working on something for this, and goes as far as to promise that something will be done to let fans play older games on the latest hardware.

Finally, Kondou is asked about what scenes and characters in the series he likes the most, and he says that Estelle and Joshua’s reunion in Sky SC still leaves a strong impression on him even now. Amongst the scenes that he came up with himself, he is also fond of the scene where Agate yells at general Morgan. Kondou says that he thinks of the series as featuring an ensemble cast, with many individual characters contributing to a greater whole.

They next show things related to the upcoming games in the series. 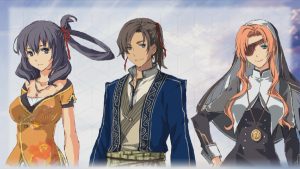 Previously-shown designs for Rixia Mao, Scarlet, and “a Nord boy” whom Kondou says some fans have already identified were shown again. It is pointed out that the boy looks familiar, and is related to a previous character, strongly suggesting that he is Gaius’ brother Toma. 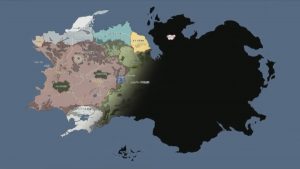 A full map of the continent of Zemuria is revealed for the first time, though with a large portion blacked out. The black portion also includes some places which have already been mentioned and seen, but not placed on a map, like Leman state, which is the headquarters of both the Bracer Guild and Epstein Foundation. Kondou says that most of the black portion is already prepared, and that nothing on the map is without meaning. 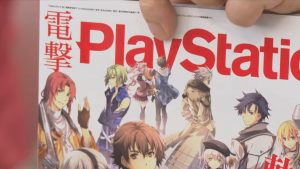 It is brought up how the latest issue of Dengeki Playstation includes two unfamiliar characters, and Kondou says that he cannot say anything about them aside from how they are involved in upcoming games. Dengeki’s Someya points out similarities to them and the characters 3 and 9 from Cold Steel 4’s in-game novels, and Kondou only says to wait for further news.

Finally, Kondou shows two screenshot printouts of things currently in development, one of Elise and Rean in Ymir, and one of Noel Seeker seen from behind. 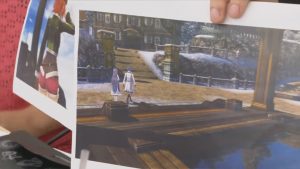 Kondou says that they are currently working on a new game engine which is used in these screenshots and allows for better graphics. Someya asks if these are from the side story/epilogue-like game said to be apart from the next actual sequel, and Kondou acknowledges this, saying that for example, they want to show what certain characters, who did not appear in Cold Steel 4 despite the game going to Crossbell, were doing during that period.

The talk show concludes with Kondou thanking the fans, staff and voice cast for supporting the series, and with messages from various members of the voice cast congratulating the series on its 15th anniversary. 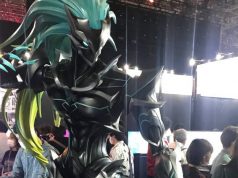