Part 2 of this article is available here

Kamitani says that how to depict a modern world in the backgrounds was something they discussed heavily early on in the project. While backgrounds in previous games like Dragon’s Crown were 2D, 13 Sentinels was the first to use 3D backgrounds, and it took a lot of time to complete them. Hirai says that depth perception is harder to handle in a modern day setting than in a fantasy setting, and Kamitani adds that another problem is how assets could not be reused: For example, in Muramasa they could reuse forest assets and still have the player feel that they were in different places, but this is harder to do in a modern setting.

Maenou notes that the small size of the company means a constant lack of resources, and that the inability to reuse assets, which was something they had always done, resulted in their job being made that much difficult, and Kamitani says that this also affected the story. While he did write the script to use only certain backgrounds, not unlike a stage play, there was a limit to how much he could do with the character animations without requiring more to be made, and he did his best to write a script where characters would only act in certain ways.

They next discuss the art of the characters in their cockpits. Hirai says that Kamitani had said that he wanted them blue, and the first piece of art of Hirasaka in her cockpit by Kamitani was also blue. Kamitani says that his choice of the colour was because it felt more “camera-like” and “like the movie Alien”.

The graphics in the battle sequences were designed to look like an operation monitor display, and though the enemies originally used sprites, designers Shigatake made graphics for them to look like 3D holograms. Maenou points out that the monsters were only to get abstract depictions from the beginning of the project and asks Kamitani why this was the case, and Kamitani says that he had several reasons, one being that since this was to be a strategy game, he thought it would be cool to have the game look like a warship’s combat information center’s screen.

Kamitani says that he was unsure if it would be alright to have the game’s graphics look like this, but was inspired to go with it by looking at the 2000 PS1 simulation game Gunparade March, which used similar graphics for its battles. The explosions on the other hand were inspired by the 2000 PS2 puzzle game Fantavision’s fireworks. 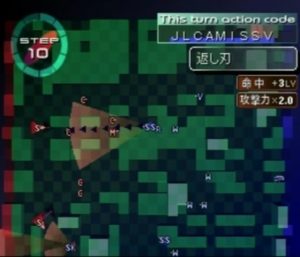 A battle in Gunparade March

Next, the interviewer points out how the Cloud Think function in 13 Sentinels: Aegis Rim: Prologue did not have voice acting included, while the final product did, and asks why this was the case. Yamamoto says that the recording was done at the point that Prologue was released, and they could have included voice acting for the Cloud Think in Prologue if they wanted to, but did not because at that point they were still unsure if they would be able to have all the Cloud Think portions voiced in the full game.

Kamitani wanted to be able to change lines right up to the very end, and constantly proposed that they not have voice acting so as to not have the release date delayed, but in the end the game had voice acting and the game was released on schedule. Kamitani says that recording began as soon as a part of the script was finished, and there were points where he got an idea and wanted to use a character but was told that he could not as recording for that character had been completed, resulting in him having to come up with a different idea.

They were busy up to early October 2019, with them still being busy even after Tokyo Game Show 2019. Kamitani says that he was still writing lines for the battle sequences while TGS 2019 was going on.

Kamitani says that though Grim Grimoire was conceived as an RTS/adventure game, they did not have enough time to work on it and it ended up being like “watching a drama”, and he wanted to take another chance at that concept. He also filled 13 Sentinels with robots and sci-fi, and the things he experienced and liked as a youth. The interviewer asks if that means the main target for the game are people of the same age as Kamitani, and he says that this is because the project started off as a small-scale one, and that he thinks people his age would certainly be interested.

Yamamoto intercedes, saying that 13 Sentinels is a mosaic of everything Kamitani has met and loved, and that players may find themselves resonating with that, or the individual experiences of the 13 characters, and he hopes that everyone above 15 (the game is rated CERO C for 15+ in Japan) will give it a try. He says that 13 Sentinels is certainly more of an artistic game than one made to please the masses, and that the completion of something with its sheer complexity alone makes it art, and that he feels that the 13 stories and the moving ending Kamitani came up with overcome generational barriers, and should be played by everyone who can.

Kamitani says that because the project took so long, he cannot help but remember all the problems they ran into. He mentions Atlus getting angry at them for the lack of progress at a dinner after Tokyo Game Show 2018, and feeling that he was going crazy after rewriting the plot over and over again for three years and yelling in the middle of the night.

Maenou says that there will never be another game like 13 Sentinels, and that it is absolutely impossible to make a direct sequel, and Hirai says that it is a miracle that it was completed. Kamiya says that even if the game sells well, he would not be able to make another one, and Atlus would not permit it in any case.

While 13 Sentinels is complete, the staff did discuss the possibility of DLC during production. Kamiya says that they are considering using assets like the backgrounds and background characters to make a different game, and that he would like to make an action game like Final Fight or Kunio-kun, something like the 1999 PS1 horror adventure game Yuuyami-doori Tanken-tai, or a cat life simulator.