Issue 683 of Dengeki Playstation features an interview with some of the key developers of Ryuu ga Gotoku 7 (known as Yakuza: Like a Dragon in English): Chief producer Yokoyama Masayoshi, producer Sakamoto Hiroyuki, and director Horii Ryousuke.

The developers are asked why the game is set in Yokohama, and Yokoyama says that they started off looking for an entertainment district close to Tokyo which would be outside of the Tojo-kai’s territory yet also be a place where someone would dispose of a corpse. It had to be close enough to Tokyo as Kasuga would be shot in Kamuro-cho, and he would die in transit if it was too far away. They initially thought of using Kamata, which is close to where Sega’s former headquarters was, and used to be where Sega staff would drink, but they gave up on the idea due to Kamata’s lack of landmarks.

While they were considering what to do, Yokoyama thought of Yokohama’s Hinode-cho, where he used to live. Ultimately, the game’s area is an amalgamation of the real world’s Hinode-cho, Sakuragi-cho, and Isezaki-cho. Yokoyama spent most of his 20s living there and already knew it well, and decided that they might as well use a place he was already familiar with. The apartment building he used to live in also appears in the game.

Horii adds that they also wanted to clearly show the gap between the wealth and poverty and create a town with two sides to it, and he felt that Yokohama would fit perfectly. Yokohama’s central business district of Minato Mirai, which can be seen from the game’s areas, represents wealth, and is contrasted with the poverty of the people who are unable to go there.

The interview moves on to discuss the battle system, with the interviewer remarking that it feels like it belongs in the Ryuu ga Gotoku series. Yokoyama says that they adjusted the battle system over and over again, noting how the “Just Guard” system was an element that they added after observing players interact with the demo at Tokyo Game Show 2019, namely how they would press the X button when being attacked by enemies. While there are no buttons to press to defend yourself in a typical command-based battle system, previous games in the series did have a dodge button assigned to X, and this inspired them to add the Just Guard system, which allows the player to reduce damage taken and prevent status ailments by timing a press of the X button to match an enemy attack.

Sakamoto says that levels influence difficulty greatly, and Horii elaborates, saying that as 7 is an RPG, they need to have players feel that they need to raise their levels, and so they put in a few exceptionally powerful enemies as a message to players that they need to level up more. He does acknowledge that forcing the player to grind is not something that they are aiming for however, and says that there are only a small number of points where this happens.

Yokoyama points out how that many people dislike RPGs because of the grinding, and says that they reached the conclusion that it simply has to not be boring, and he thinks that by making systems different from typical RPG number crunching, they succeeded in this.  Horii adds that there are many ways to proceed in the game, with there being no one absolute correct way to play it, and he calls this the game’s greatest strength.

The interviewees are next asked to talk about the parts of the game they worked on. Sakamoto says that the entire battle system has been improved. The interviewer remarks that they were surprised at how much it had changed since the TGS2019 demo, and Sakamoto says that the effort put into improving the battle system after that resulted in the greatest amount of work in a short period of time in the series’ history.

Horii says that he was tasked with turning the game into an RPG while keeping it a Ryuu ga Gotoku game, and he designed it around connecting the adventure parts to RPG growth elements. He says that if the adventure parts themselves changed, that would result in a loss of the Ryuu ga Gotoku identity, and so he tried his best to keep the series’ existing flavour even when trying new things. He says that playing the game in a way that a player usually would will result in the player characters growing stronger, and is confident that upon clearing the game, players will feel that they played a Ryuu ga Gotoku game.

The interviewer asks them to say something to the fans. Yokoyama says that he personally aimed to make the game one that people can enjoy discussing, and thinks that he succeeded there. He says that contemporary entertainment does not end with a single person, and that social media grew because of people wanting to share what they enjoyed. While they have released many trailers and play videos of the game so far, he says that they have not managed to convey all of the game’s good points, and hopes that fans will play and discuss it.

Finally, Horii says that with the genre and protagonist changing, 7 was the toughest job for the developers yet, but also the most fun they had. This was both due to them learning many new things, and feeling the game’s potential. He is sure that it will be a great game that players will enjoy, because the developers themselves enjoyed making it. Yokoyama adds that working on the game also lead to the team growing more confident, as even though making an RPG was very difficult, they managed to do so with the same team in the same period of time as usual. 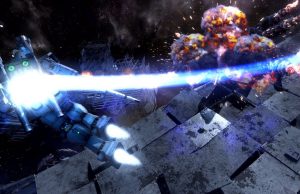