The Disaster Report (Zettai Zetsumei Toshi) series, the first game of which was released on the Playstation 2 in 2002, has long been known for producing peculiar cult games, all of which center around a protagonist having to survive in a city wrought by natural disaster. Disaster Report 4 is the first new title in this series in nine years.

In Japan, Disaster Report 4 had a long and troubled development history. First announced for the Playstation 3 by Irem Software Engineering at Tokyo Game Show 2010 for a winter release that year, the game was delayed multiple times, eventually to a spring 2011 release, before its cancellation was finally announced on March 14th 2011, a mere three days after the 2011 Tohoku earthquake and tsunami.

In addition to the unfortunate timing, which also led to problems with the Japanese video game ratings board CERO, series creator Kujou Kazuma has also gone on record to detail trouble between the development team and Irem. The month after the cancellation, core staff members of Irem’s game department left and formed a new company, Granzella, which later obtained the rights to the series in 2014. In November 2015, Granzella announced that Disaster Report 4 would be remade for the PS4, and the game was finally released three years later, on 22nd November 2018.

The game starts with the player making a custom character, who is just arriving in a city that they have never been to before; The default options have the player character as a college student here for a job interview. While on a bus, an emergency earthquake alarm sounds off, and the city is rocked by a massive earthquake, large enough to cause buildings to collapse and to make the ground to liquify in places, and also cuts off ground access to the city, which delays the arrival of aid. The player has to find some way to survive and escape. 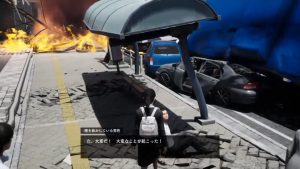 Unfortunately, the game does not do a good job of portraying its themes, and the gameplay would have felt dated even if it had been released back in 2011. Gameplay feels very much like a mid-90’s adventure game, with the player wandering around aimlessly in hopes of triggering the next event, of which there are no indicators. In many cases, the triggering of multiple events being required to advance the game, yet the events are entirely independent of each other, meaning that the player cannot logically guess what the next step will be. 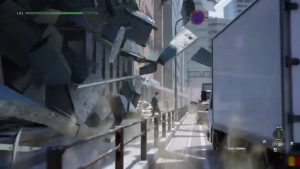 Additionally, further earthquakes and aftershocks frequently occur, and sometimes trigger buildings collapsing and other similar problems, and in most cases this results in an unforeseeable instant death for the player if they are simply in the wrong place. 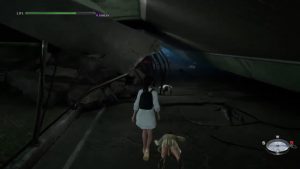 While the same can also be said of the previous games in the series, the tone of the game is also wildly dissonant, with cartoonish characters and situations juxtaposed onto the horror of a massive natural disaster. Death is also treated perplexingly nonchalantly: For example, one area finds the player walking close to a highway, under which dozens of people are for some reason marching in a circle. An aftershock causes the highway to collapse, killing everyone under it, and the road is literally filled with corpses, but the player character and everyone around seems to pay this no heed at all.

It should be noted that the game does include an in-game glossary of real-life information on what to do in the case of a natural disaster, and even includes a firefighter’s personal account of the 1995 great Hanshin earthquake, all of which feels far more chilling than anything the game actually does itself. 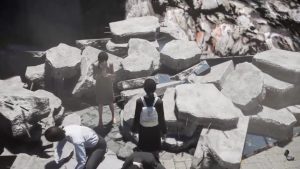 Ultimately, Disaster Report 4 remains entirely in the vein of its predecessors- It is a peculiar cult game, and not a particularly good game. A player might be able to find some enjoyment, however, in how it is very much a time capsule from an age where small game companies would release weird games on the PS1 and PS2, that feels completely out of place on the PS4. Anyone who enjoyed the previous titles in the series, or is looking for something very out of the ordinary might find some value in this game. Regular gamers however should at least take a very close look before they leap.

The Good: The game remains faithful to its roots, and is very much aDisaster Report game.

The Bad: The game remains perhaps too faithful to its roots, and may be too much a Disaster Report game, feeling like it would have felt dated even had it been released back in 2011. Additionally, the story is filled with nonsensical twists and straight-up bad writing, and has a wildly unbalanced focus on letting villains have the last laugh which results in a frustrating lack of catharsis.

Conclusion: Disaster Report 4 is unfortunately quite simply not a very good game. Gameplay is little more than a series of contrivances, leaps of logic, and in the cases of unforeseeable instant deaths, sheer blind luck. The story is not particularly compelling, and can be best summed up as “weird”. For better or for worse, this is the sort of game which has one think “cult”.

This review was originally published on 6 December 2018 and was last updated on 26 February 2020 with information on the worldwide release dates.