The 4 June 2020 of Weekly Famitsu features an interview with Takahashi Tetsuya of Monolith Soft, director of the Xenoblade series, regarding Xenoblade Chronicles: Definitive Edition.

The interview begins with Takahashi being asked when the project for Definitive Edition started, and he says that it was in 2017, immediately after the release of Xenoblade 2, and planning on it happened while they worked on the Xenoblade 2 expansion Torna – The Golden Country.

The proposal for Definitive Edition was made alongside the one for the new game that Monolith’s first production team is currently working on, and a presentation for the two games was held around May 2018. Actual work on Definitive Edition began after Torna was completed, around August 2018, and for a brief period of time, the team was working on three titles at the same time. Takahashi also says that the team is divided into three groups: One that works on DE, one that works on the new game, and one that works on both.

Next, the interviewer inquires about the reason why this version is being called the Definitive Edition. Takahashi says that they decided on it after discussing it with Nintendo, and that because they made many upgrades to the game, they decided against calling it a “Deluxe Edition” which would suggest that it only has additional content, and that it should be called a “Definitive Edition” as its respects the original version. 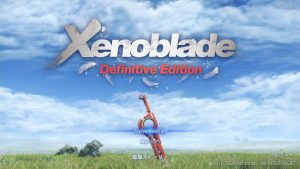 Takahashi says that as the game’s content itself was adequate, they focused on user-friendliness and looks in DE. In regards to user-friendliness, they did things like adding pop-ups to help players out with tutorials when they have problems with certain bosses (such as taking too long or losing multiple times), and effects like filling the party gauge when the player returns to the fight. The user interface was also improved, to make it easier for the player to understand what is being displayed and what they should do.

In regards to looks, Takahashi says that in the original version of the game, limited resources due to hardware limitations meant that they had to make concessions when it came to the characters’ graphics, and was a regret that they had lingering. While DE still has limitations of funds and time, they did their best to improve these as much as they could.

Overall, they carefully drew hard lines to determine what could and could not be changed in DE, which was a direction that producer Yamada Shigekazu and director Inaba Michihiko also determined.

The interviewer points out how the original game, being a Wii title, had SD graphics, and asks if everything was remade for HD. Takahashi says that because funding and time was of course limited, not everything could be remade, and so they first determined what they should and should not remake. As such, weapons, equipment, enemies and maps got upgraded textures and new textures to work with shaders, while player characters, parts of other important characters such as their faces and hands, Monado, new equipment in DE, and facial animations in cutscenes and scripted animations were remade from scratch.

However, some individual staff members also did their own work for some NPCs and enemies that were not originally planned for upgrades; while these are not as different as they would be if they were remade from scratch, Takahashi says that they would be glad if players took notice.

In regards to the UI, Takahashi says that they also prioritised making it so that the player is able to access all of the content, making sure that they do not give up on or miss it. This includes a function to guide the player to quests, and a function to inform the player when the conditions for certain arts are met, and filter and favourite functions for equipment.

Next, how only some of the music tracks in the game are new recordings is pointed out, and Takahashi is asked how they chose said tracks. He says that as a remaster, there were limitations on how much they could do, and this also applied to the music, meaning they could not have an orchestra perform new recordings for every track in the game.
Thus, they ranked the tracks by priority, and did new orchestral recordings for high-priority field and battle tracks, while using other methods such as remixing or using new digital files to improve others. Takahashi also says that the compression rate for music tracks is lower than that of Xenoblade 2’s, resulting in improved sound quality.

As tracks for cutscenes were made to match said cutscenes, modifying them would result them in having to edit the cutscenes as well, and so they used the original versions. However, Engage the Enemy alone is a new recording due to its popularity and how no editing would be required.

The interviewer asks if there are any other changes to the game, and Takahashi says that while they did not make many changes to the story and battle system, they did add new functionality such as auto saving, a casual mode, the ability to stock quest and landmark EXP, the ability to level down at will, a time attack and event theatre, and cosmetic equipment.

The new “Future Connected” epilogue scenario is discussed next. Takahashi says that “two and a half” reasons resulted in them making it: The two being how it is a new feature that would be easy to explain to existing fans and how it connects to the future of Xenoblade, and the “half” reason being because some thought Melia was pitiful. 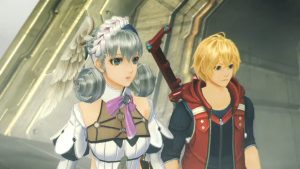 Additionally, the shoulder of Bionis was a map that they had worked on but were not able to finish and include in the original release, and it was an ideal stage for Future Connected.
The story in Future Connected was not written by Takahashi, but by cutscene lead Ohta Mamoru after the story was determined by the staff. The script for quests such as the Noponger ones, however, are written by a team lead by Iwamoto Masahiro as usual.

In regards to the length of Future Connected, Takahashi says that if he played it himself, it would take him 10-12 hours to clear it, and that it would take longer for someone playing it for the first time, around 20 hours if including side content. He says that if they had turned it into paid DLC like Torna – The Golden Country they could have made it longer, but they felt it was inappropriate to charge fans too much for a remaster, and using too many resources for DE would have an adverse effect on development of the new game they are currently working on, and so they did their best to balance resources and work on it.

Takahashi says that players have access to Future Connected straight away, meaning that fans who have already played the original Xenoblade Chronicles can start on it immediately. He does however add that as it is an epilogue, new players should start with the main game.

The interviewer next asks how Takahashi feels about having a chance to come face-to-face with Xenoblade Chronicles once more. Takahashi says that he feels that the original release does not pale in comparison to even the latest games of 2020, and is confident that they were able to make such a game ten years ago because of their will and resolution to never fail again.

While gaining strength from failure is something that might not be very desirable from a business standpoint, he says that for creators it becomes a huge driving force: Steady ratings and sales and establishing brands leads to creators working as if they are on top of an unmoving rock, and while this may lead to pride and confidence, it also has the danger of misunderstanding the reasons for success and over-confidence. Takahashi thinks that the power to struggle against adversity, the power to not fear change, and the power to change are born from failure, and Xenoblade is what taught him that. As such, he is thankful to be able to work on it again.

Finally, Takahashi is asked for a message for both existing Xenoblade fans and new players. He says that Xenoblade was a turning point for growth and great change for Monolith Soft, and Definitive Edition combines the will and resolve of the old and new staff, and is also an indication of Monolith Soft’s future. He hopes that old fans will be able to feel the transition of will, and that new fans will be able to feel the future ahead of this history.

Xenoblade Chronicles: Definitive Edition will be released for the Nintendo Switch worldwide on 29 May 2020.

Did you play the original Xenoblade Chronicles? What did you think about it? Let us know in the comments below!