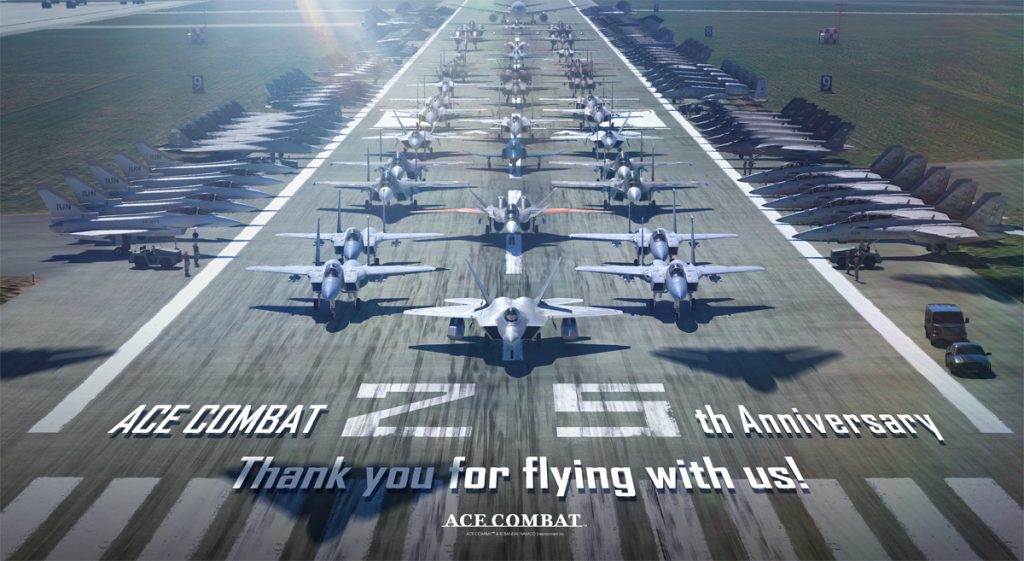 The interview starts with them discussing the 25th anniversary commemorative illustration. Kanno says that there is a meaning to the way the planes are lined up, but declines to say precisely what this is as he wants fans to think about it themselves.

When asked about the general theme of the illustration, he says that they wanted it to be something suitably lavish for the 25th anniversary, compressing elements of Strangereal into one image. He also points out how the year 2020 is a special one for Ace Combat’s universe, and says that they aimed to have a picture that would have one have a sense of Osean ex-president Harling’s legacy.

The year 2020 is when the events of Ace Combat 5 are declassified in the Strangereal universe, but the Razgriz squadron (the protagonists of Ace Combat 5) not being included in the picture is pointed out by Kouno. Koyanagi says that the four shadows on the ground might be them.

The interviewer comments that they would like to walk around the base shown in the picture, and Kanno says that because it was rendered in 3D, it might become possible if they try. He also says that it was rendered in 8K, but Kouno said that the image being too clear made it look photograph-like, and had them add depth blur. Kanno also points out that they have a vertical version of the image for use as smartphone wallpapers on the official Twitter account.

Next, the five are asked about their thoughts about the 25th anniversary. Koyanagi goes first, saying that he feels that the series’ fans are firmly rooted in: He is grateful as a creator for fans who love the series for its planes and world, even though the gameplay, which boils down to basically just locking on and shooting, has not changed for 25 years.
Kanno says that he is thankful to both those who have supported the series all this time, as well as those who are new to the series. He also takes the chance to thank the development team, as well as people who have collaborated with them such as Production I.G., Studio 4℃, Satou Dai, Katabuchi Sunao, Kawamori Shouji, Yoshizaki Hibiki, and Suzuki Youta.

Itomi, says that the first game he worked on full-time after joining the company was Ace Combat 3, and says that he never thought it would be a series that would see its 25th anniversary, and Kouno says that everyone present at the interview shared that sentiment. Itomi says that the series continuing for this long is thanks to the fans’ support. He also says that he enjoys looking at things done by fans on social media such as fan surveys for older games and custom model kits.

Shimomoto, the youngest of the five, says that he was still in middle school when Ace Combat 2 was being developed, and that he never even dreamed that he would be part of the development team on the series’ 25th anniversary. He says that he hopes to be able to celebrate the series’ coming anniversaries as well, but says that age-wise he might be the only one of the five who will still be around for the 50th anniversary, to which Itomi jokes that they might not make it to the 30th.

Kouno, who is last, says that he has spent half of his life alongside Ace Combat, and thanks the fans for supporting the series for a quarter of a decade.

Next, they go on to look back at the older games in the series, starting with the original Ace Combat (released as Air Combat in the west). Kanno says that in retrospect, the game was one that provoked human imagination: Due to issues with the number of polygons that could be displayed there was no ground, with only wave-like objects instead, and clouds were just simplistic textures, yet somehow one could feel that they were actually flying.

Kouno says that the Air Fortress remains in his memory the most, and that it was because “the Admiral” put it into the game that the Ace Combat series has superweapons. The interviewer asks about this “Admiral”, and Kanno explain that it is referring to the art director of the first game, who referred to himself as such which resulted in everyone else doing so as well. He says that if it were not for the Air Fortress, the Arsenal Birds might never have been born. He also says that there was also proper art with notes for the Air Fortress, and that because the other artists did not know about it beforehand, they were all very surprised and it led to them realising that Ace Combat was the sort of project that would welcome such bold flashes of inspiration.

Regarding Ace Combat 2, Kouno, laughing wryly, says that the game ran into problems because of Kanno, who kept changing things even after they had confirmed a final build, and says that Kanno has not changed at all: He did the same when working on Ace Combat 7; Kanno retorts that Kouno has not changed either.

Moving back to the game, Kouno says that 2 became the baseline for the games to come after. Kanno says that while the Playstation was a magnificent piece of hardware, its specs were still low, and they struggled to build spaces and improve the quality with its limited specs and memory.

The topic shifts to Ace Combat 3, and Itomi says that while he does not know the exact the details because the project had already started when he joined the company, he heard that it was originally not an Ace Combat game, but rather a game named “ACSF”; the promotions side opposed this, however, and the game was rebranded to Ace Combat 3.
The interviewer comments on how 3 had strong sci-fi themes, and Kouno and Itomi point out that Neon Genesis Evangelion was popular at the time, and there were many fans on the development staff.

Kouno says that 3’s anime cutscenes were divisive at the time, but in recent years he has heard more and more of how people were influenced by them, and feels it has been vindicated. Itomi says that there are especially many people in the anime industry who cite Ace Combat 3 as having influenced them, including Yoshizaki Hibiki of Khara, who went on to become the cinematics director of Ace Combat 7. He adds that unfortunately the western releases of 3 completely cut out the anime parts, which left the game without a story.

Shimomoto and Itomi add that 3 also resulted in the completion of the Ace Combat series’ base gameplay system, adding special weapons and the ability to move the camera to look around, while Kouno says that Ace Combat 3 had him feeling that the Ace Combat series really could do anything, but because the development team went overboard on doing whatever they wanted to, they had problems deciding on what to do with Ace Combat 4.