The biggest major point in the original game’s ending that has had players confused for over two decades is the fate of Ramza and his group. While Ramza did succeed in saving his sister Alma and defeating Ultima, the latter resulted in a massive explosion, and the next scene takes place with Orran mourning Ramza and Alma’s deaths. Immediately after this, however, Orran sees the two of them riding by on chocobos, and he exclaims “They’re both of them alive!”.

Many players interpreted this as being a vision, with Orran speaking metaphorically: That while Ramza and Alma were dead, Orran was saying that they lived on in a fashion because he would tell their story. This is in fact not the case.

In order to understand Final Fantasy Tactics’ ending, one needs to look no further than the writer behind the game’s story, Matsuno Yasumi.

In 2012, Matsuno wrote a series of short monologues from the point of view of Final Fantasy Tactics’ characters, showing his intention in the ending. As of over a decade after the end of the war, Ramza is still roaming the world, and says that he intends to make a village to serve as a haven for those who were scarred by the war, such as orphans.

While these tweets showed Matsuno’s intentions in the ending, however, he was not affiliated with Square Enix at this point in time, meaning their canonicity might have still been questionable.

This changed in 2014, when Matsuno worked with Square Enix in a Final Fantasy Tactics collaboration with Lord of Vermillion III. With the characters in the collaboration coming from after FFT’s ending, Matsuno stated clearly that it was now official (公式設定) that Ramza and all of his comrades survived the ending of the game.

As of the events of his appearance in LoV3, a few years have passed since the ending of FFT, and Ramza is still with his comrades, and in fact the group has grown even larger. The group is now in Ordallia and helping out a resistance movement that opposes the country’s oppressive regime. There are rumours that as king of Ivalice, Delita is considering sending troops to Ordallia to help quash this resistance, and Ramza is prepared to oppose Delita once again in order to protect his friends, both new and old. While it is doubtful that the king himself would come to Ordallia, this nevertheless would put the two former friends on opposite sides once again.

Matsuno also points out how Ramza’s survival is in fact vital to one of the core themes of Final Fantasy Tactics: The contrast between Ramza and Delita.

This core theme is also the answer to the final line of dialogue in the game, where Delita asks “Ramza… What did you get?”. 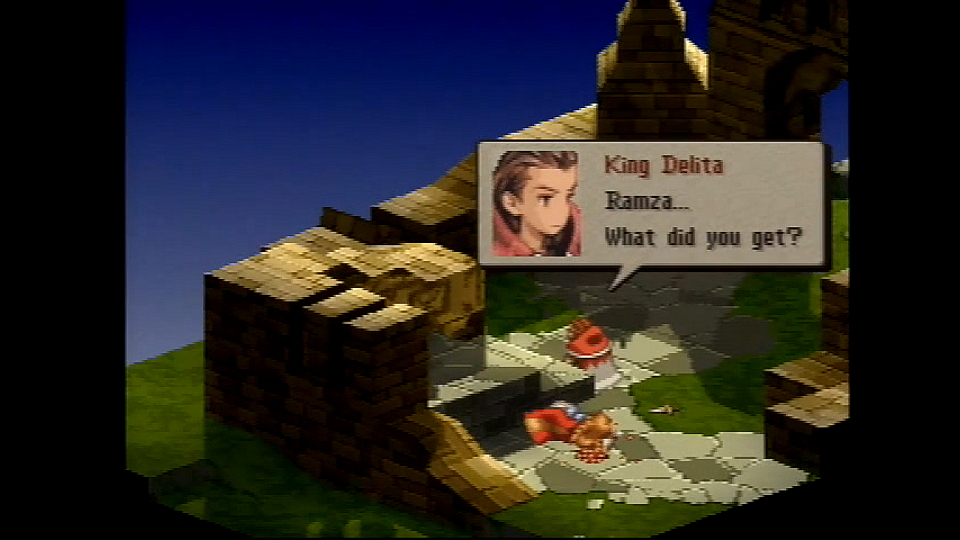 While Delita truly loved Ovelia, his actions resulted in her distrusting him, leading to this scene. Meanwhile, Ramza lost his status in society and was branded a heretic, but managed to save his sister and gained irreplaceable friends and comrades.

Matsuno says that in the end, Delita gained everything, but this came at the expense of losing love. Conversely, Ramza lost everything, but in return gained love (in both cases this is the broad sense of the word “love”, which includes friendship). This theme is also reflected in the title of chapter 4, “Somebody to Love”, which in Japanese is known as “Everything for Love”.

The Return to Ivalice

Many fans of Final Fantasy Tactics, particularly in the west due to Lord of Vermillion III and Matsuno’s tweets being available only in Japanese, assumed that since Matsuno wrote Final Fantasy XIV’s Return to Ivalice storyline, it was probably canon, or at the very least showcased Matsuno’s intentions with the original Final Fantasty Tactics.

However, Return to Ivalice clearly contradicts Matsuno’s previous statements on FFT’s ending: In Return to Ivalice, Ramza’s entire group died to seal Ultima away, with the exception of Alma, who went on to marry Orran and is thus an ancestor to Arazlam Durai. This is in itself contradictory, as Alma was alongside Ramza’s group when Ultima was defeated in FFT, and if the explosion had killed them it ought to have done the same to her.

The fact is that Matsuno never at any point intended for Return to be a sequel to FFT, and in fact was acting against misinformation stating that it was since 2017:

“I’m troubled by misinformation being spread around, so I’m making this clear: It’s not a story taking place after FFT! (…) It’s nothing close to a sequel!”. 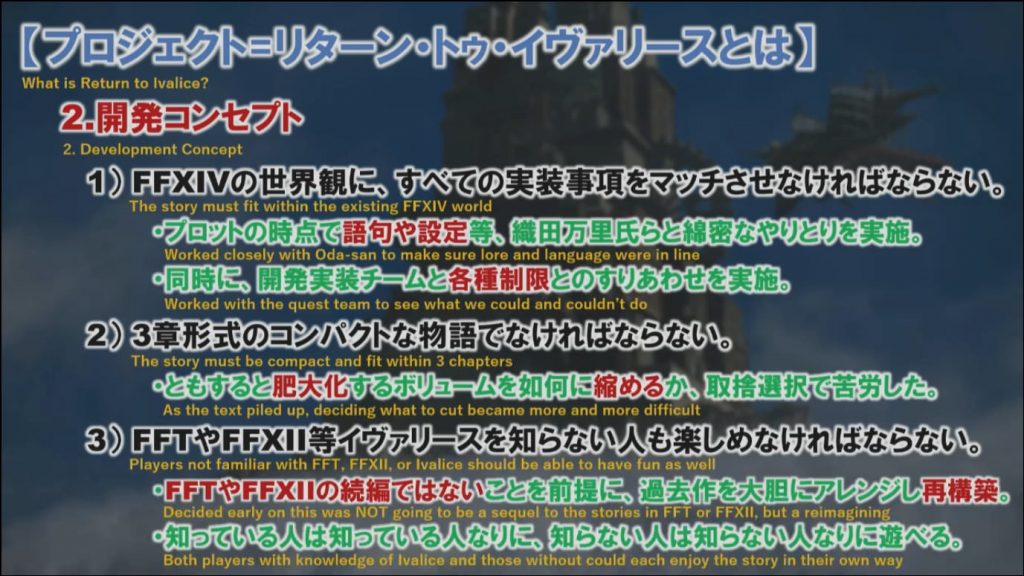 This sentiment was reiterated in a more official setting in Letter from the Producer Live on 11 May 2018, where it was again stated that it was “decided early on this was NOT going to be a sequel to the stories in FFT or FFXII, but a reimagining”.

Matsuno further elaborates on his intentions with FFT’s ending and its connection to Return to Ivalice in an April 2019 interview with Dengeki Online.

In this interview, Matsuno says that just as he wrote in Lord of Vermillion III, it is canon (正史) to the timeline of the original Final Fantasy Tactics that Ramza and his friends survived the final battle:

“I’ve been saying this out loud for quite some time, but FFT’s story is complete on its own. I also touched on it a bit in Lord of Vermillion III’s text, but Ramza and his friends survived the battles of FFT and left Ivalice, having adventures elsewhere. This is canon. As such, RTI’s story is something completely separate.”

Matsuno also reveals that he was in fact asked if Ramza survived at a shareholder meeting back when he was a Square executive, and answered clearly that he did, further indicating that Ramza’s survival was intended to have been canon that far back.

Matsuno discusses his reasoning behind writing a story diverging so far from his original intentions in this interview, saying that looking at player’s thoughts on the internet, he felt that at least half of the players of FFT ended up with the impression that Ramza’s group died in the ending. This gave him the inspiration to make a story that would be a sequel to this alternate version of events, giving Ramza a new ending for the people who felt that they did not have closure.

Matsuno also talks about Delita in this interview, saying that many players said that they remembered Delita being a more cold-hearted character than how he is in Return to Ivalice.

While many players assumed that Ovelia died in that final scene after being stabbed by Delita, Matsuno says that she in fact survived this. She did die of other reasons later, however, leaving Delita to rule alone. He never intended for this scene to be taken as Delita killing Ovelia, and misunderstandings such as this are one of the reasons why he wanted to use Return to depict Delita as he always meant him to be.

Matsuno also thinks that player’s impressions of Delita might have to do with the age of their ages when they first played FFT, and that what players think of him would probably change with their age. Producer Yoshida Naoki thinks that if players go back and play the game again as adults, they might think of Delita differently.

What did you think of Final Fantasy Tactics’ ending, and Delita? Let us know in the comments below!