The 5 November 2020 issue of Weekly Famitsu includes a 25th anniversary commemorative  interview on Tactics Ogre with some of the original developers who worked on the game: Director, writer and game designer Matsuno Yasumi, art director Minagawa Hiroshi, and music composer Sakimoto Hitoshi. Though unable to participate in the interview, illustrator Yoshida Akihiko also answered several questions outside of it.

The interview moves on to discussing the music. Sakimoto’s involvement began after everything discussed previously was done, and he received orders detailing the number of tracks, how long they should be, and a list of the situations they would be used in, and he composed the tracks while referring to these.

Sakimoto says that in the case of Ogre Battle, the characters were more straightforward, and so he aimed for an overall less serious impression, but with Tactics Ogre the tracks ended up more emotional due to the story, and he chuckles as he recalls how Matsuno kept saying that all the tracks were dark. He thinks that he now has the ability to use music that does not sound dark for scenes that are, but back then, his level of skill meant that he could only portray dark scenes with dark music.

Next, the interviewer asks about how sound effects were made, and how Iwata Masaharu, who handled the music alongside Sakimoto, was involved. Sakimoto says that sound effects were handled by Imai Toshiaki (who was listed in the game’s credits under “sound manipulation”). Actually inputting music into Ogre Battle was handled by Imai, but done by Sakimoto and Iwata in Tactics Ogre.

Iwata was with Quest during their NES days, and remained involved with them working on Magical Chase for the PC Engine and other projects after he returned to working as a freelancer, and Sakimoto says that his own involvement with Quest came through Iwata.

Iwata was initially the only composer working on Ogre Battle, and Sakimoto was called in as a helper when the soundtrack shifted to an orchestral focus. The two had worked together multiple times before, and so the way they split their work was very casual: Whenever a list of tracks and sound effects came, they would take turns to choose the ones they wanted to do to split it up evenly.

Battles are next to be discussed, with the interviewer starting by asking whether equipment weight factoring into wait times was something they decided on having from the beginning, and Matsuno acknowledges this.

Matsuno says that they started with the idea of making a game targeting players who were bored of the regular RPGs of the time, but found strategic and tactical simulation games to be too difficult. Fire Emblem already existed, but that was still too hard. He says that RPGs were popular because no matter how tough the enemies are, anyone can win as long as they raise their levels. Though this may lack flavour, there was a huge market for it, and so they decided to make Tactics Ogre a game where everything would go fine as long as the player raised their levels. 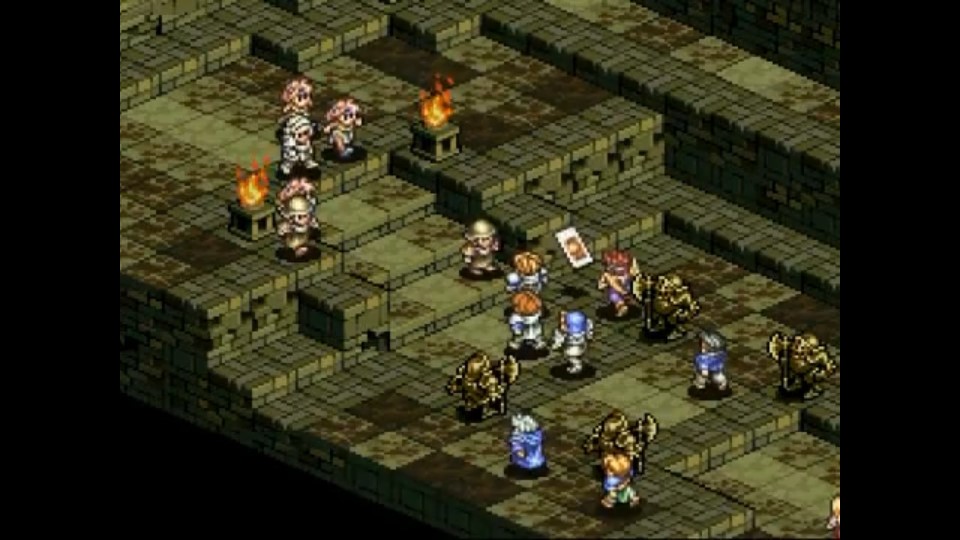 He also says that having allied and enemy phases where the player and computer take turns to move all their units was also a hurdle for RPG players, and so he decided to make a game where each unit would move one by one. But he felt that just taking turns would be too simple, and so he came up with the idea of introducing the concept of time to the game, which would be affected by weight and unit attributes.

The interviewer next inquires about how MP slowly builds up instead of starting out fully charged, and Matsuno explains that this is because in his head, magic is far more powerful than swords. If units started with full MP, they would immediately be able to use powerful magic. Thus, he wanted to make it so that if you want to use powerful magic, you need to wait and charge your MP. As an extension of this, he felt that if they wanted to keep bows powerful, they should apply the same principles to them, and this resulted in how they worked in Final Fantasy Tactics.

Next, the interviewer asks how the game’s maps were made. Matsuno says that at a very early stage he came up with orders saying what type of maps with what sort of attributes are needed for each area for the entire game, and also prioritised more than anything the looks of each map, asking whether the player would want to fight on each individual one. 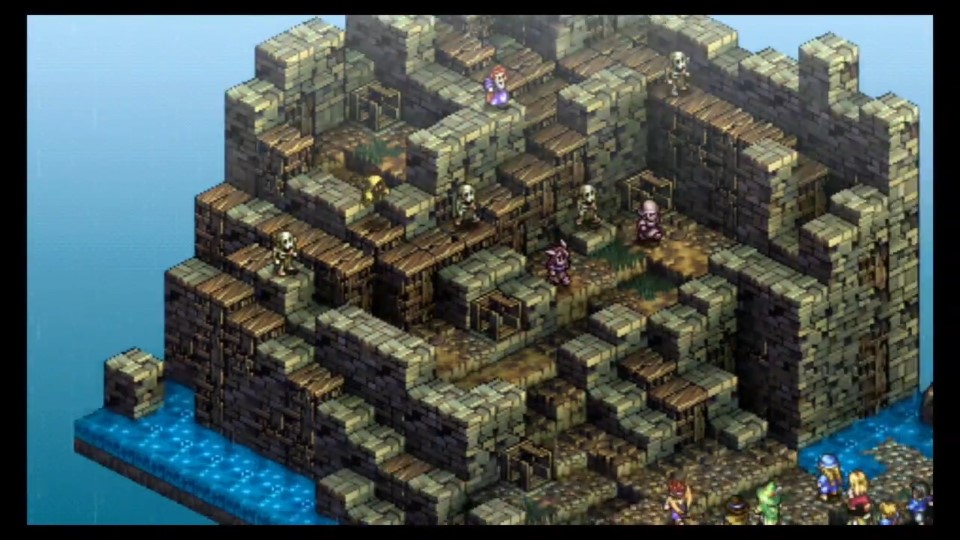 Matsuno would first make mockups of the maps, and show them to Yoshida, who would in turn make modifications based on what terrain chips they had in order to make them look better. Matsuno reiterates that they would absolutely prioritise the looks over the terrain effects and strategy, and only afterwards adjust the difficulty with unit placement.

Minagawa adds that they also prioritised looks when placing units, with attackers being on high ground and defenders on low ground, and says that mysteriously, when they test played the maps, they found that they played as if they were placed perfectly.

Since the topic of height was brought up, the interview moves to discuss bows, with the interviewer recalling that it was said in a past interview that the power of bows and how the player would be able to ignore their shown range was something they had planned on putting in from the beginning.

Matsuno says that they thought that this idea, where players would be able to hit enemies with bows outside of their range depending on their own experience and skill, was a very interesting one. But many found it to be hard to understand, and they dropped it in Final Fantasy Tactics.

Matsuno says that the idea of having knockback attacks which would allow the player to push enemies into holes came from a similar perspective, of them thinking it would be an interesting addition as no other games had done anything like it at the time. The hanging gardens map, he says, turned out as it did solely because of this idea.

The idea for throwing stones comes from history, with Matsuno using the story of samurai general Kusunoki Masashige defending his castle by throwing stones at enemies trying to climb the walls during a siege, knocking them down. He says that he started with the idea that he wanted to make stones a strong thing in the game, but they grew weaker over time as he wondered if it would be appropriate for stones to be powerful enough to defeat enemies entirely in a fantasy game.

Minagawa recalls that stones were initially strong enough that the player would be able to win by just throwing stones at the enemy as they approached, and that there was a point in development where battles on Tynemouth Hill would result in most of the units on both sides being defeated by stones before they could even enter close combat, which resulted in them discussing how they would absolutely have to change things.

The interviewer next mentions how they found maps where the player has to rescue characters difficult, such as in the case of Haborym, and asks if making them difficult was a conscious design choice. Matsuno says that it was: In games like Tactics Ogre, the difficulty tends to drop around the middle of the game when the player gains access to more features and abilities. He says that because it is possible to clear those stages without rescuing the characters, they decided to make it so that doing so would be easy, but they would become difficult if the player attempts a rescue.

The interviewer points out that the characters to be rescued tended to not behave as they wanted, and Matsuno says that if the characters behaved ideally, it would lower the difficulty, and so they were purposely made that way. If making the game today, he would do it differently, but back then he thought it was fine.

Minagawa says that the player’s equipment, levels would affect the difficulty as well, and at the time they considered all that to be part of clearing the game as well. With the harder maps, the entire development team would come up together with ideas on how to get through, and if they managed to do so, they considered the map to be okay.

Matsuno gives an example, where in order to rescue Haborym, someone removed Canopus’ equipment to make him faster and sent him ahead to heal Haborym. When balancing the game they took the stance where as long as any one person on the team could clear the stage at the expected levels, they considered it to be fine, adding that because of the number of stages they could not spend too much time on game balance. He recognises that this is an excuse, but says that there were limits to the way they worked on the game, with the same person handling the story and battles and level design.