The 5 November 2020 issue of Weekly Famitsu includes a 25th anniversary commemorative interview on Tactics Ogre with some of the original developers who worked on the game: Director, writer and game designer Matsuno Yasumi, art director Minagawa Hiroshi, and music composer Sakimoto Hitoshi. Though unable to participate in the interview, illustrator Yoshida Akihiko also answered several questions outside of it.

This is part 5 of a 5-part article: Start with part 1 here

Part 4 of this article is available here:

Matsuno brings up how it is frequently said that Tactics Ogre is based on the Yugoslav Wars, and says that this is by and large a misunderstanding: It is one of the motifs, but he did not base the game on any one conflict; he brings up the 1994 genocide against the Tutsi by the Hutu in Rwanda as an example of the sort of information that influences him, and points out how there are still similar conflicts around the world right now, such as in Syria, or the recent clashes over territory by Azerbaijan and Armenia. 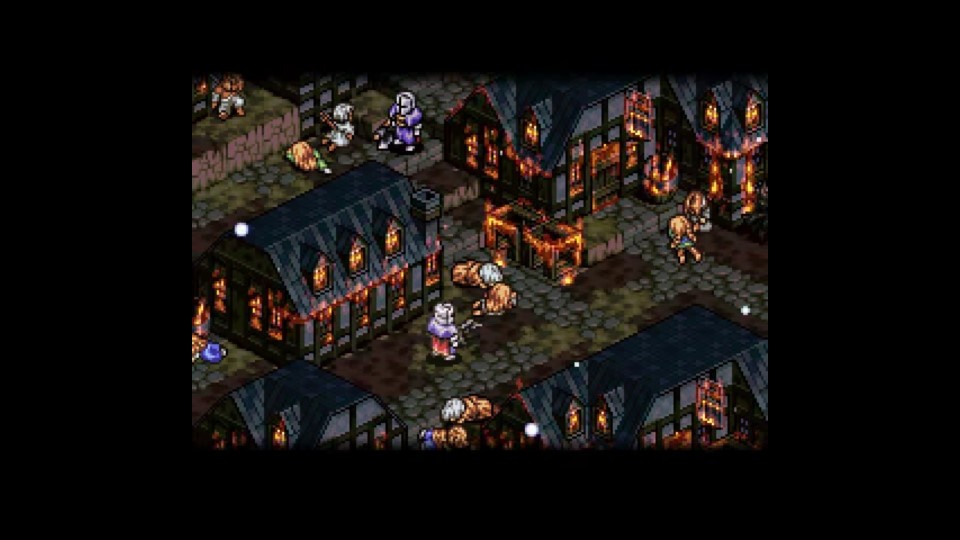 The interviewer asks if Matsuno means that the theme of Tactics Ogre is how the problems of a multi-ethnic country head towards a conclusion within the flow of history. Matsuno says that it is not limited to ethnicity: Like the current BLM movement in America, As long as there are two or more people with differing values, there will always be conflict, and the theme of Tactics Ogre is how that sort of conflict is resolved, and what sort of sequence the conflict goes through as a part of history.

Matsuno brings up the novel Japan Sinks by Komatsu Sakyou, which he says is a simulation of what would happen to the Japanese people if they lost Japan, in the form of a novel. Shuto Shoushitsu is a similar “simulation novel”, tracing the events of what would happen in Japan if Tokyo was suddenly lost. Matsuno says that while he writes with such simulation novels in mind, when it comes to video games, the player can change even a story of such grand scale, and he thinks that this brings about synergy between the gameplay and the story.

Illustrator Yoshida Akihiko was unable to participate in the interview alongside Matsuno, Minagawa and Sakimoto, but answered several questions separately.

Having orthodox Disney-like designs for Ogre Battle, and then more realistic designs to fit Tactics Ogre’s serious story were both Matsuno’s ideas, and they were things that came about naturally during the development process.

Yoshida is next asked about how his time with Quest working on Ogre Battle and Tactics Ogre affected him. He says that when Ogre Battle was well-received, the whole team felt the importance of making a new game to go with this flow. He says that the fact that they decided to not make something close to the first game, however, is very indicative of the Ogre Team’s overall personality.

He, too, was excited and thrilled to be able to try out new things, and because his art style was not fully defined at that point – and he says that it still is not – he went back and forth experimenting with art styles while handling over 100 character illustrations and almost all of the pixel art backgrounds on his own, and he calls this an experience that he cherishes, as these days it is the sort of thing that can only be found in indie games.

Yoshida says that he found it fun and rewarding to work on the backgrounds, which take up the majority of the screen, and also mentions the influence of Minagawa: Though still young at the time, Minagawa was already one of the top designers in the industry, and Yoshida says he is fortunate to have been able to see his work up-close on a daily basis, which gave him stimulus and much to learn from.

The Possibility of A Sequel and the Canon Route

The interviewer starts to ask about the possibility of a new episode in the Ogre Battle Saga – a sequel to Tactics Ogre – and Matsuno immediately interjects saying that you would have to ask Square Enix about that.

The interviewer continues with the question, asking which route of Tactics Ogre would be considered canon if a sequel were to ever come out. Matsuno says that he has no intention of ever giving a clear answer to that question: The market has changed since the days of the SNES, and the developers themselves have grown older, with their outlooks changed as well.

He says he himself does not even know what he would do with the routes, but because the players all have their own favourite routes, he does not want to make it clear. The interviewer asks if he means that he might make it vague, so that it could be a sequel to any route, to which he replies that he might make it a sequel to a different route that was not even in the game.

The interviewer mentions how the game is still loved after 25 years, and asks Sakimoto how he feels about this. Sakimoto says that it was an impactful game for them back when they were developing it, and they too were very excited. They were not sure if it would sell, but were absolutely sure that it would at the very least be talked about.

In the end the game did sell, but Sakimoto thought at the time that they might just have gotten lucky. But when the PSP remake was released and he played it again after such a long time, even though he thought that more life experience meant he should have responded to the story differently, he still enjoyed it.

He concluded that this meant that the game has a timeless appeal to it, and that it will probably still be enjoyable ten years from now. He is honoured to have been able to work on it, and feels that all the hard work and effort put into the game back then has not gone to waste.

Matsuno says that he is truly thankful that there are fans who have loved the game for 25 years. Other developers who were unable to participate in the interview of course also worked on the game, and he says that the effort they put into it was not half-hearted. It is a game with many thoughts and feelings put into it, and they feel blessed that it continues to be loved. He says that while some fans are old ones, he has also met  students and young developers in their 20’s who say that their parents played it, and says again that he is truly thankful.

Matsuno says that he would very much like to answer the calls for a sequel to Tactics Ogre, but this is ultimately a business decision, and he reiterates that it is ultimately up to Square Enix.