The interviewer asks what FFX meant to the interviewees, and Kitase is first to answer, saying that FFX was a turning point that gave him a better idea of how to make realistic drama closer to film. While FFVII’s transition to CG from the pixel graphics of the previous generation did allow him to imagine what things would be like in the future, X made it far clearer.

To this, the interviewer points out how much games progressed in the four years between 1997’s FFVII and 2001’s FFX. Toriyama says that up to FFX, they were using the same script they had been using since FFVII, which meant that the game planners were able to tweak data themselves. In the games after X though, with XIII as an example, it became more common to use specially ordered tools instead, and work had to be sent to designers specially trained to use said tools. As such, Toriyama feels that FFX was the last game that had a hand-made feeling to it due to how pthe lanners would touch the data directly themselves.

Kitase adds that he personally adjusted many of the animations in FFX, and Toriyama points out that Kitase also made most of Blitzball himself. Kitase says that the role of the planners changed greatly before and after FFX, and that writing proposals and making orders becoming their primary job coming after.

As for Nojima, he says that when working on FFVII and FFVIII he focused on having the characters as vessels that the player could project themselves onto. In FFX, however, he tried to have the characters stand on their own while still having players being able to empathize with them. Trying to figure out how to balance the characters with being vessels for the player is still something he puzzles over now, with FFVII Remake, and he says that FFX was the game where he first started thinking about this. 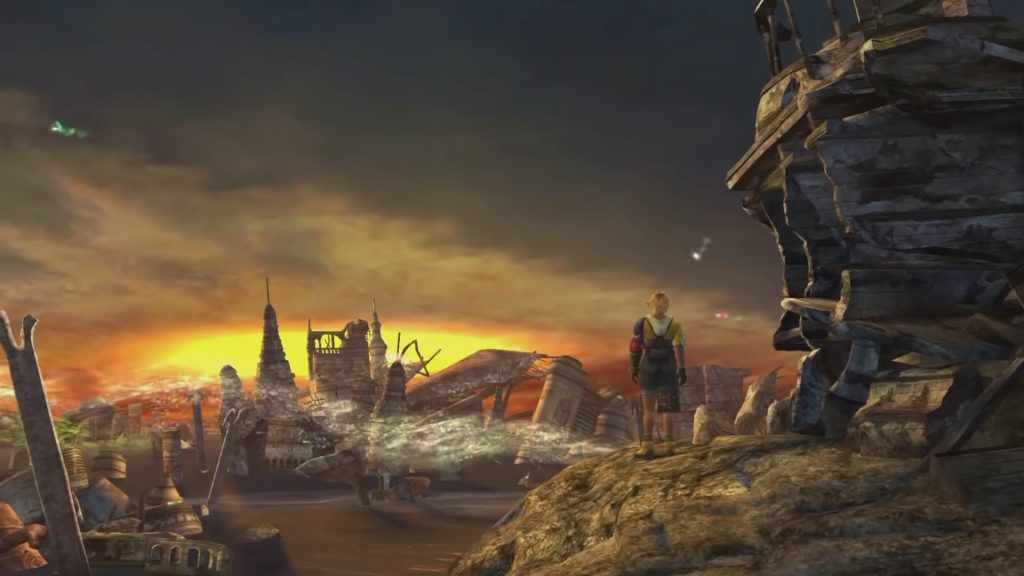 Though games have progressed massively visually in the past 20 years, Nojima says that the visuals becoming more realistic actually makes it harder for him, because he has to balance what the characters think with what players think, which he calls “synchronizing” the players and characters. One thing he did to improve synchronization in FFX was bringing the Zanarkand scene to the start of the game, and framing the majority of the story as a flashback: By having the player follow Tidus and the other characters on their journey before gathering at the campfire, the player can better understand what they are feeling there.

The interviewer says that they found the use of the flashback to be effective, with the emotions of the characters being amplified when seeing the Zanarkand scene a second time, and Nojima says that he actually avoided using flashbacks in FFVIII because after FFVII was released, he read comments on the internet saying that using flashbacks is the lowest one can sink to, and that FFX having more flashback scenes is rebound from FFVIII’s lack of them.

Next, the interviewer points out the similarities between FFX’s pyreflies and FFVII’s lifestream, and asks if Nojima had planned such connections while working on FFVII. He says he did not, and in fact tried to get away from FFVII while writing FFX, but that he went so far that he looped back around.

Nojima says that FFX being well-received gave him more confidence, and made him able to believe that doing what he thinks is interesting and moving, without being influenced by outside opinions, is correct. Additionally, he had a feeling that FFX would be the last Final Fantasy he was going to work on, which resulted in feelings of farewell here and there throughout the game, but in the end he continued working on the series.

Finally, Nomura is asked about what FFX means to him, and he says that as he mentioned previously, designing characters came before everything else in FFVII and FFVIII, but he changed his stance from FFX and on.

The interviewees are next asked what drove them to create FFX was. Kitase says that, as Nojima said, FFX was created at a time when the internet was starting to take hold in society, and they too looked at comments and were influenced by them. For example, people questioning “why do monsters drop money” lead to FFVIII’s salary system. While FFX’s oriental feel came from Nojima’s idea, the idea itself was influenced by feedback on FFVII and FFVIII from fans who said they wanted a fantasy world as opposed to a sci-fi one. As such, FFX is also the FF game to be influenced the most by its predecessors.

The interviewer notes how Kitase said in interviews at the time of FFX’s release that he had the feeling that he would not be able to make anything greater than it, and asks what led to that feeling, and Kitase says that it connects to another thing he used to say back then, that he wanted to make games that could be understood by people who do not know games; this comes from how, when he was playing a video game in private, one of his parents walked by, looked at the screen, and said that they did not understand what was going on. This made him realize that what gamers take for granted as the “grammar” of games is completely foreign to people who do not play games. He was driven by that to makes games that, like movies or dramas, could be able to move anyone who watched them without the need for supplementary explanation.

When Kitase looked at the window-free captions for dialogue in FFX, he felt that the medium had finally caught up and now had the ability to move people seeing it for the first time. Adding voices to convey characters’ words and emotions was also a huge leap: He thinks that while gamers can be moved with just text, there is a gap between them and people who are not used to games, and FFX fulfilled that goal. While FFVII did take a step in the right direction, it still did not have voice acting, and so was still forcing the grammar of video games onto the player to some degree. Kitase also brings up something he has mentioned in numerous past interviews: The scene in FFVIII where Squall is hit by Edea’s magic and falls, and Rinoa screams. He thinks that the scene feels very strange because of the lack of any voices, and that this sort of incomplete parts of the games finally saw completion in FFX.

Toriyama is asked what he did to make the game surpass previous ones, and he says that he thought that putting in what the series lacked would make FFX something new, and thus put it all in. Aside from that, the use of “raw” motion to the characters was also a thing: While FFVIII did make use of some motion capture, the majority of it was still hand-animated on computers. In FFX, however, they used motion capture and voice acting, which made the actors very important. He directed the acting himself, a new experience for him, and though this resulted in a great amount of work for him, he felt greatly fulfilled when it was all done.

Part 4 of this article is available here: