Fatal Frame series producer Keisuke Kikuchi was interviewed in the 19-26 August 2021 issue of Weekly Famitsu, in which he discusses the remastered version of Fatal Frame: Maiden of Black Water, previously announced for an October 28 2021 release for the Switch, PS4, PS5, XB1, XBXS, and PC.

The interviewer begins by asking Kikuchi what led to them deciding on making the remaster, and he says because the series has been supported by many people even after the release of the last game (the original version of Maiden of Black Water) in 2014, they hoped to be able to do something for the twentieth anniversary of the series in 2021, and that ended up being the remaster.

As it has been a long time since the release of the original version, Kikuchi was worried about how the announcement would be received, and was relieved that people not just in Japan but all over the world reacted positively, and he thinks this shows how accepted Japanese horror is around the world

Kikuchi is asked if they had considered doing a compendium-style release of other previous games, and he says that their top priority was having as many people as possible to play Maiden of Black Water. He says this is because the game was made to also surprise players who were touching the series for the first time.

The Fatal Frame series had lain dormant since the original release of Maiden of Black Water in 2014, and the interviewer asks if there was any talk about doing anything with it internally. Kikuchi says that he did speak with series director Makoto Shibata a bit, as well as exchange ideas with new young employees who said that they joined because they are fans of the series, but nothing led to real projects. It was the twentieth anniversary, and it being a remaster, which led to this new release of Maiden of Black Water being possible.

It is pointed out how the original release was a Wii U exclusive, and Kikuchi says that the number of platforms the remaster is being released on is due to them wanting as many people as possible to be able to play the game, especially since it is to commemorate the series’ twentieth anniversary.

Kikuchi is asked about how players received the original release, and he says that because they changed the themes and type of horror with each game in the series, there was always a mix of positive and negative reception. Maiden of Black Water’s horror themes, type of scares, increased action focus, and mission-centric gameplay were all diversive in Japan. Overseas, the Japanese horror-styled world and story and the characters were well-received, but the controls and issues with players getting lost were commonly pointed out.

The original Wii U version of Maiden of Black Water had a unique control style where the game pad was treated like a camera, and Kikuchi is asked how this translates to the remastered version. He says that the Nintendo Switch version will use the console’s gyro function to control similarly.

The interviewer next asks why they added a photo mode to the game, and Kikuchi says that when he was a producer on the Atelier series, he saw how players used the photo modes to convey to each other the charm of characters and costumes, and liked it. As such, he wanted to add it to the Fatal Frame series as well.

The Maiden of Black Water remaster’s photo mode also lets players take pictures with ghosts in them, which can lead to both scary and comedic photographs. As ghosts and cameras are both important elements in the Fatal Frame series, he feels that it is a very appropriate feature for it.

The new costumes are discussed next, with Kikuchi saying that they are added to have it still feel new for players who already played the original version. As for why they chose the costumes that they did, they went with ones that would bring out the charm of characters more, such as with the matching gothic lolita outfit for Miu and Yuri, or the triathlon outfit for Yuri, who is a cyclist.

The graphics in the remaster have also been approved, with not just a higher resolution but also better shadows, lighting effects, and water effects, which Kikuchi says should lead to better immersion. He says that they also changed the backgrounds in some parts to look better.

There are also several things changed about the gameplay which have not yet been announced, which Kikuchi says will be revealed in the future. 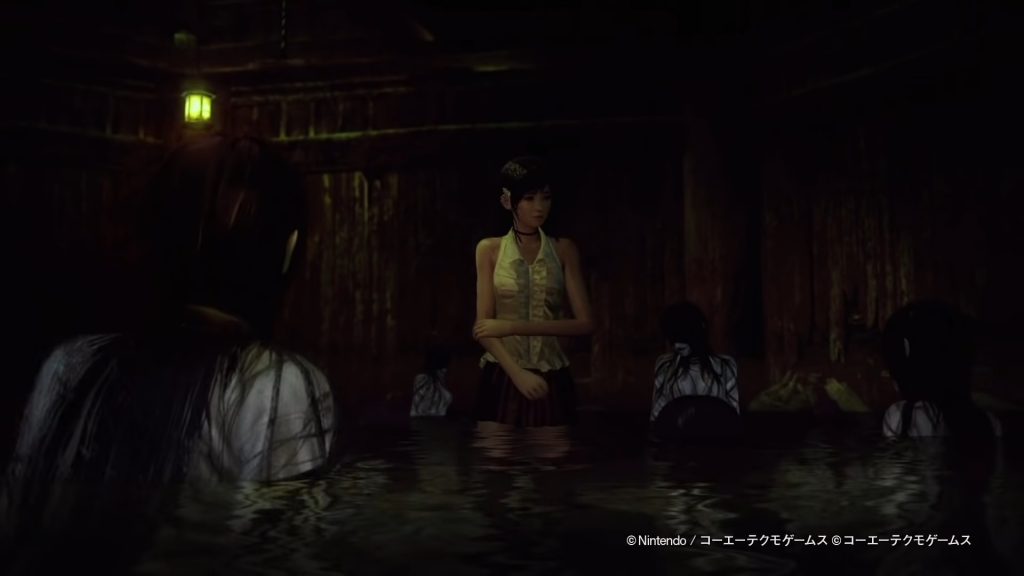 The interviewer brings up how horror game developers commonly have stories about scary things happening to them during development, and asks if Kikuchi has any. Kikuchi says that he does not personally have any, but series director Shibata always had new ones during development on games in the series. Kikuchi was too scared to listen to Shibata’s stories, but does note that Shibata said that his scary experiences are reflected in the games.

Next, the interviewer asks if good reception for Maiden of Black Water might lead to a sequel being made for the series, and Kikuchi says that he certainly hopes so. This release is just to commemorate the twentieth anniversary, but if many people play it, it might lead to a future title.

Finally, Kikuchi is asked for a message for fans. He says that he is truly thankful that people have enjoyed the game that was the first title he was producer on for two decades. While Maiden of Black Water might be slightly old due to being from 2014, he thinks that the gap in time might lead to players discovering new things and experiencing new fear. While there are many magnificent horror works in the world, he hopes that players will give the unique Japanese horror style of Fatal Frame a taste as well.

What do you want to see from the Fatal Frame series next? Let us know in the comments below!