Type-Moon’s Nasu Kinoko and Takeuchi Takashi talk about the Tsukihime remake, Tsukihime -A piece of blue glass moon-, which was released for the PS4 and Switch on 26 August 2021, in an interview in the 9 September 2021 issue of Weekly Famitsu.

The two start with discussing development of the game. Takeuchi says that while the feeling that the game is complete would usually come right before its release, in the case of Tsukihime, they actually made a PC version first before porting it to the PS4 and Switch, and the feeling of accomplishment for them came at the end of 2020 when the main part of the PC version was completed.

Nasu says that they had been working on the “omake corner” sections since January. They initially thought to leave them out, but after the main game was completed changed their mind about it, thinking that they should remain in even if they felt “doujin-like” and unprofessional.

They aimed to make the omake corner part not just fun but also useful for the player, and Takeuchi also worked hard on them, and Nasu says that they are as fun as usual. He adds that he once the omake corner parts were done he could not wait for it to be released, but the time up to release went by in a flash because of how busy they were with Fate/Grand Order. 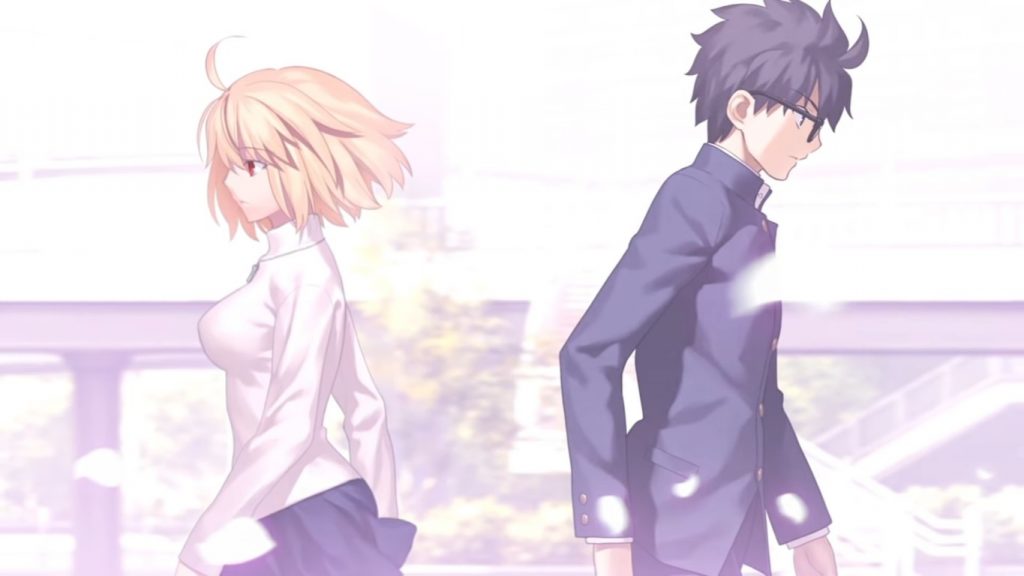 Since the game was completed by January, the interviewer asks if the release taking this long meant that the porting of it to console was difficult. Takeuchi says that it was actually because they kept saying that they wanted to make changes all the way up to the end, which also happened in the last year of development on the PC version.

Nasu says that saying the PC version was ported to consoles makes it sound like it was just copied over, but in actuality it is more difficult than that, with them having to check if the game actually works the same. The Arcueid route was actually done at the end of 2019, and they spent all the time since then checking to see if the console versions would work the same way. Takeuchi adds that they continued making small adjustments after production of the console versions had gone gold, which were put into a day one patch.

The interviewer asks how far back the project goes, and Takeuchi says that it starting moving after they announced it in Type-Moon Ace in 2008. They had wanted to remake Tsukihime for a very long time, but were too busy with the Fate series to do so. In 2008 they had felt that work for Fate was done for the time, and so decided to start on the Tsukihime remake.

Work actually began after the release of Mahoutsukai no Yoru in 2012. Nasu and Takeuchi each replayed the original version of Tsukihime, wrote down what they wanted to do with the remake, then had a boot camp together where they banged their heads together about it. Work began immediately after that, but then the Fate/Grand Order project started and they became unable to work on Tsukihime.

The main story of Tsukihime was 80% done by this point, and Takeuchi was almost done with the line art for the character portraits, so they thought they would be able to finish it while working on FGO, but FGO ended up being more work than they thought, and they put the Tsukihime project on hold in 2013. This continued until 2017, where work on FGO calmed down for a bit allowing them to resume work on Tsukihime.

According to Nasu, with Mahoutsukai no Yoru, they aimed for a movie-like third person perspective, with things like scenes without the protagonist and expressions of the atmosphere, and so it was “richer” than Tsukihime. The script was also 10-20% times longer than a Tsukihime route, and with the additional effort put into the presentation, it ended up 20 hours long.

However, Tsukihime having route splits means it has more text overall, and it also has multiple times the number of illustrations of Mahoutsukai no Yoru, and so trying to give it the same level of quality would mean it would never be done. Thus, from an early stage they decided on prioritizing player satisfaction over total quality. But when he played the pilot version he could not help but compare them.

Takeuchi says that Mahoutsukai no Yoru’s fantastic visuals were thanks to Type-Moon graphics chief Koyama Hirokazu’s quality control, and the result of a massive amount of work he did on it. With the Tsukihime remake, they decided on focusing on quantity over quality for the art, with less details in each piece but more pieces altogether, but when they actually started work on it Koyama and the graphics team ended up going all-out anyway, and this resulted in the visuals taking longer than anticipated.

The interviewer points out that the Tsukihime remake has the attention of many new fans from Fate/Grand Order, and asks if they made any considerations for this. Nasu says that they did not: While FGO might be an RPG, it is also a game where players enjoy the story. As such, he thinks that players who enjoy FGO should be able to enjoy Tsukihime, as it is “just the usual Type-Moon”. While the world’s setting is shared to some degree, it is only on the same level as Type-Moon settings are usually shared.

Takeuchi chimes in saying that it has the usual “we think it’s interesting, but we don’t know about you” feel, and that he thinks that if someone reads the description and thinks it sounds interesting, they will enjoy it, and adds that they did also make a lot of changes to the game system-wise to modernize it.

Another form of the game being modernized was the setting being moved to the 2010s, and the interviewer asks how this changed the content. Nasu says that the change was simply due to that being the time period in which he wrote it. Additionally, the original version being set in 1999 means that a lot of things in it are old. This is not to say that old things are bad, but he was unsure if it would be appropriate to have a game for young contemporary players with themes that are not new. This was fine with Mahoutsukai no Yoru because it was about the bubble period, but Tsukihime’s main focus is not the period of time but Arcueid. As such, he decided to update the world while keeping the characters’ themes.

Nasu also says that as a result of the scale of FGO’s story being so big, Tsukihime was also changed to some degree: Where the original was an incident in a regular suburban town, the remake is “Hollywood in a big city”.

Takeuchi says that while it is a remake of the original, they wanted it to have meaning for players of the original as well, and so it is not just the original remade with modern techniques and technology, but something made to be entirely new. They thus felt for such people to “meet” Tsukihime again it would be appropriate for it to take place in the current age, and setting it in a big city would also feel more “Tsukihime, now”.

The interviewer asks if the characters designs being changed was also part of this renewal of the setting, and Takeuchi says that at the beginning, when they were thinking about what would be necessary to have players of the original version rediscover the remake, he went back to his roots and reconstructed the designs. 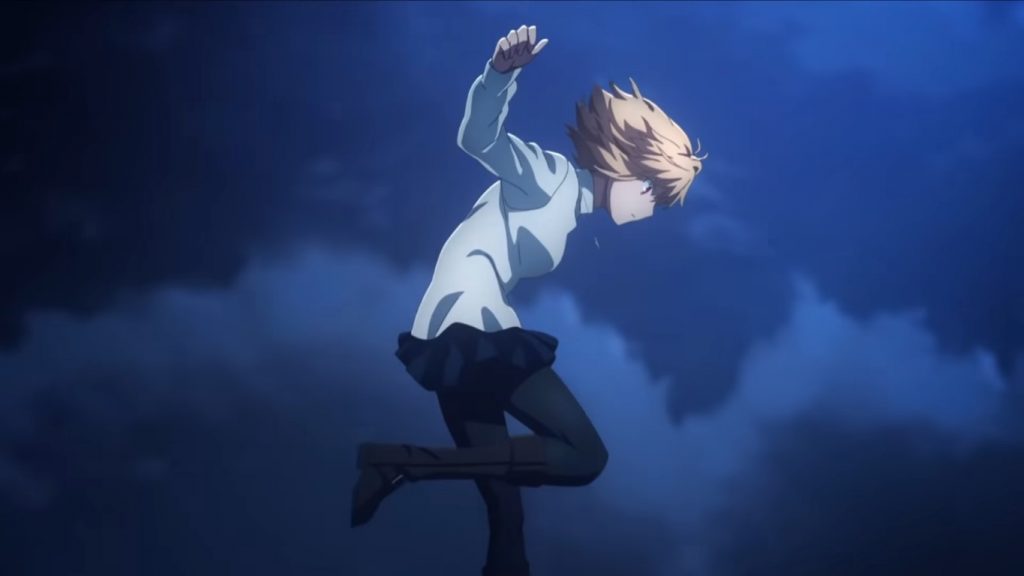 For example, Arcueid was based on a certain model, and the new design is based on what he would do right now if doing the same thing. As Arcueid’s clothing was always simple to begin with, he started wanting to do something about them, but after a lot of experimenting he found that whatever he did made her not look like Arcueid. He ended up concluding that the clothes are part of her identity, and ended up just changing the length of her skirt so that the design would be mostly the same, will also being clearly different. 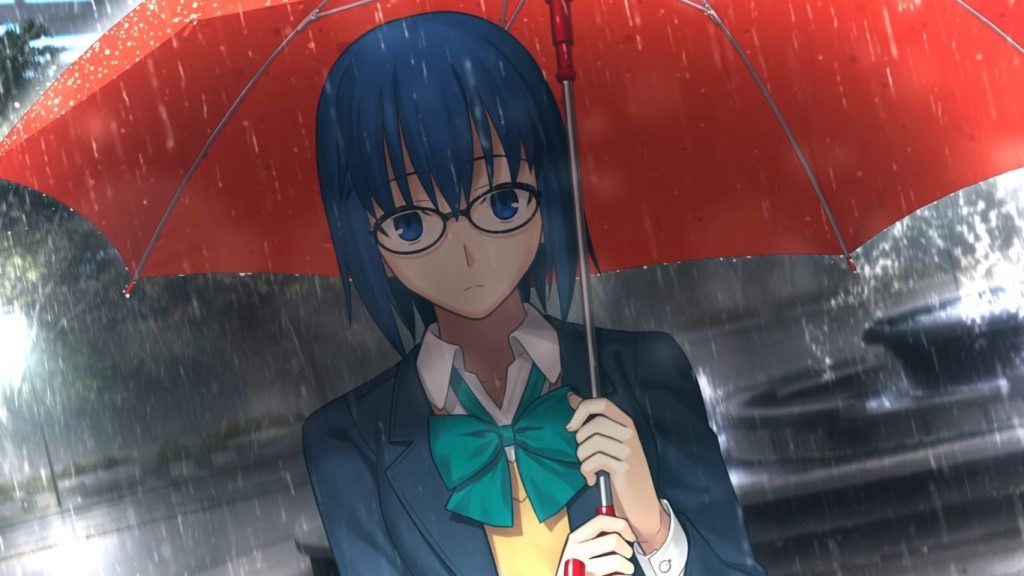 As for Ciel, Takeuchi was sure from the beginning that changing her hairstyle would change the impression of her greatly. Some parts were also updated to match the story, and altogether this added up to a new Ciel.

Takeuchi says that he also put a lot of care into designing the new characters, especially in a certain female character who is extremely interesting. Nasu adds that this character is very special, and has a very strong “this is the new Tsukihime” feeling to her. The original version of Tsukihime had very few characters, the absolute minimum needed for the story, but this made the world look small. This is something that Nasu brought this up in the first boot camp with Takeuchi, saying that if they were going to remake Tsukihime, he wanted to make it a wider world, with new characters.