While the Fate franchise has made Type-Moon a huge success, spawning numerous spinoffs and adaptations in a multitude of media and one of the highest grossing mobile games of all time, this makes it easy to overlook the group’s humble roots as a handful of amateurs who self-published their first game, Tsukihime, back in 2000.

The success of Tsukihime propelled Type-Moon to fame, and they formed the company Notes in 2003 (Type-Moon is a brand name), before releasing the first game in the Fate franchise, Fate/stay night, as their first commercial game in 2004. The Fate series became a huge hit, and the majority of Type-Moon’s content since then has been centered around it, but the Type-Moon universe shares many elements amongst its many titles, and interest in Tsukihime remained high amongst new fans eager to see the world’s roots, old fans who wanted to play it again, and the creators themselves, who have stated time and again in interviews and elsewhere that Tsukihime remains something special to them.

Tsukihime – A piece of blue glass moon- is the first part of the long-awaited remake of Type-Moon’s Tsukihime, originally announced in 2008. 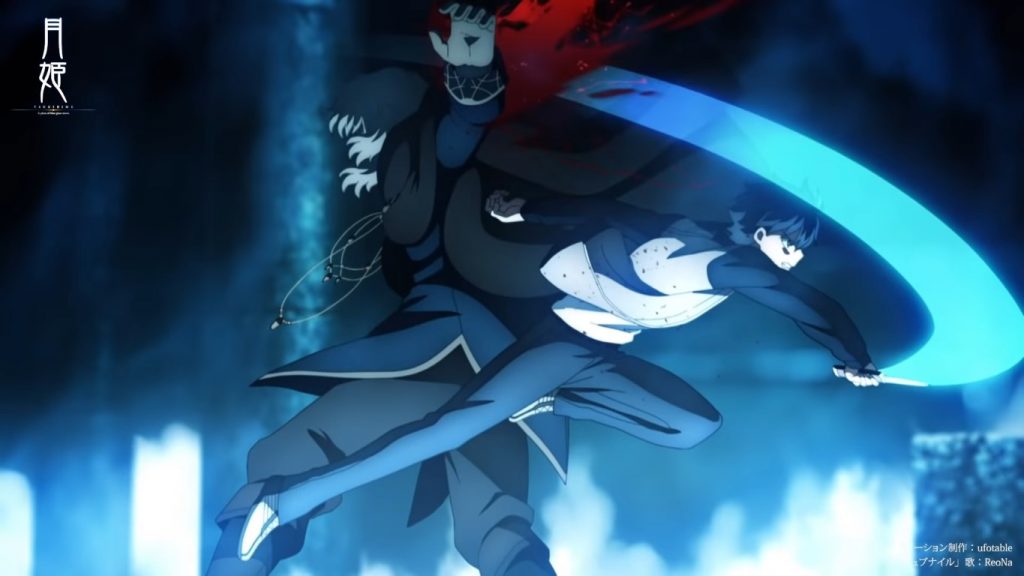 While this might make it sound like the game is incomplete, especially given how the regular edition of the game is priced at 7700 yen, it is not lacking in content: The game is 40-60 hours long, with full voice acting and an extravagant amount of art and music (the soundtrack, due to be released this November, consists of 8 discs). However, this does mean that many plot threads- some of which are entirely new, introduced in the remake- are left dangling for now.

The somewhat convoluted premise of Tsukihime follows high school student Shiki, who after a near-fatal accident in his childhood gained the ability to see “death lines” on all things, which when traced will bring about the end (death) of the object or being. A mishap with this ability results in him getting acquainted with the vampire Arcueid, who is in his town hunting down another vampire that is responsible for serial killings going on recently, and he ends up aiding in her search. They encounter various other enemies (mostly lesser crony vampires) and secret agents of the Church also after the same quarry along the way. 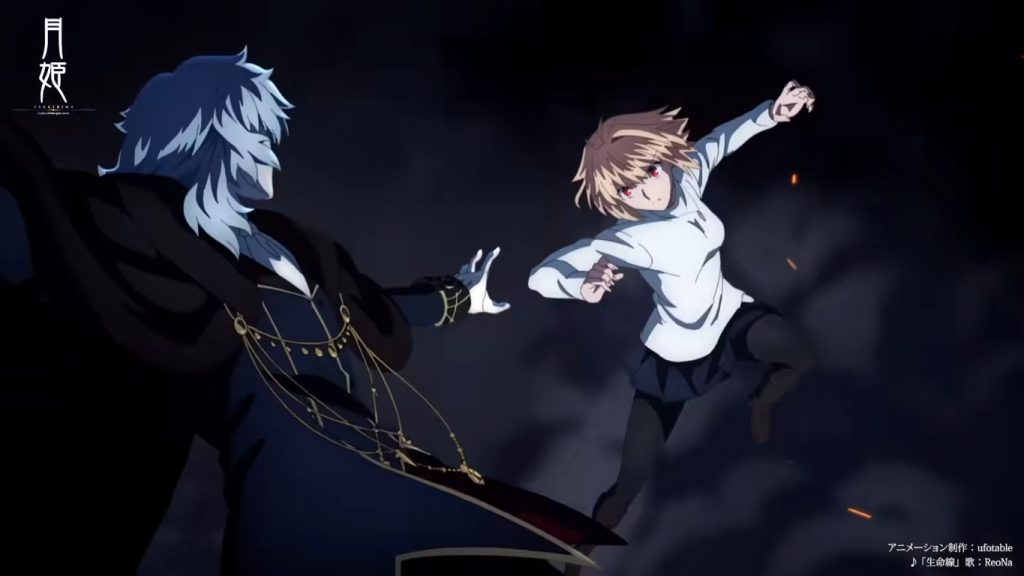 Tsukihime creator and writer Nasu Kinoko has gone on record talking about how the remake was partially inspired by the Rebuild of Evangelion movies, and it shows: Much like how some of the Angels were replaced by completely different ones in the Rebuild movies, Tsukihime similarly keeps the framework of the story while changing the fine details such as the enemies that the protagonists fight or adding new characters, and the result is something that still feels very similar to the original, yet is different enough to be refreshing for someone who is familiar with it.

While the Arcueid route for the most part stays faithful to the original version, however, the Ciel route is extremely liberal in reconstructing the story from the ground-up. While the general plot itself remains mostly the same, a great number of details, and how the plot points are expressed, have been changed entirely. 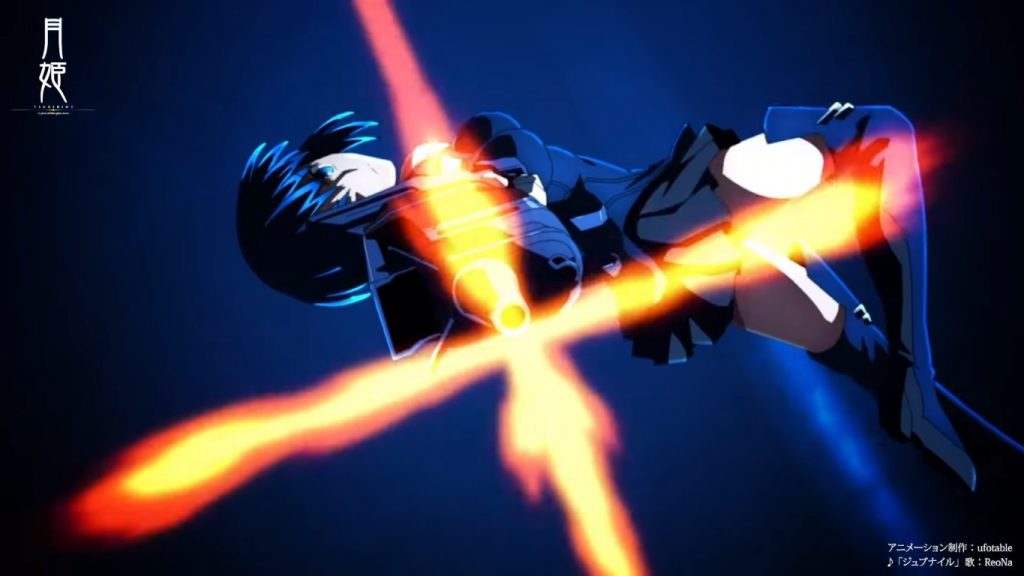 It should be also noted that both routes have their lore updated to fit in with the current state of the Type-Moon universe, and in some cases feel like they might be a bit too over-the-top, especially in the battles: While in the original game they still managed to have a contained feel to them which did not detract from the atmosphere, the remake’s battles are big spectacles that feel like they were pulled straight out of an action blockbuster or battle anime movie, which some fans might not be too happy about.

It also cannot be overstated how the game puts an immense amount of effort into the presentation: While the game still is a visual novel, with the story presented through text and static images, the way the static images are moved around, combined with the sheer number of portraits and stills used, manages to animate the characters and action to a degree almost never seen in the genre. Characters changing their pose and expression mid-sentence, and the camera zooming in or shifting angles multiple time in a single conversation are commonplace, and contribute to making the game feel unusually active for a visual novel.

While the story and presentation are great, however, the game is unfortunately far from flawless: The system, while sufficient, is not particularly great, and has a number of issues. The 100 save slots might seem more than sufficient at first glance, but if one tries to aim for all of the bad endings (a necessity to unlock a certain secret), the 100 slots start to look like far too few.

Another issue is with how there is no one universal volume control for all voice acting: The volume control for voices is sorted by character, and can only be adjusted after a character has appeared in the game. If a player wants to change the volume- especially if playing on the Nintendo Switch’s table mode, where the console’s maximum volume alone might not be enough- they have to do it for each character individually, and new characters will always appear with their volume at default and not matching other characters’.

Despite the game having a large number of bad endings which the player is encouraged to collect, with each bad ending unlocking a third-wall-breaking bonus comedy section and seeing all of them unlocking a final secret, the game does not make this easy. Though the game does come with a flowchart, scrolling through it is needlessly slow, and it gives no advice on how things are unlocked. If one is accustomed to some of the better flowcharts seen in the genre, such as the ones in Baldr Sky or Tasogare no Sinsemilla, using Tsukihime’s can be just arduous.

Another baffling system issue is the lack of a “jump to next choice” button: The game, by default, only comes with a regular skip button which just fast forwards through the game, and a “skip scene” button which jumps to the next scene. Using either of these functions in a subsequent playthrough while hunting for bad endings can be nothing short of miserable.

Thankfully, the game does in fact come with a “jump to next choice” function: The problem is that enabling it is bafflingly convoluted: The player has to check a box enabling the badly-labelled “auto skip read scenes” function in the options, and turning this function on makes the “skip scene” button have the player jump from the current spot to the next choice or unread scene, and thus functionally the same thing as a “jump to next choice” button. The game does not come with a manual, and does not bother to explain any of this: Instead, the clarification of how to get the function to work was clarified on Twitter.

Overall, this reviewer enjoyed the story and, as someone familiar with Tsukihime since Type-Moon’s doujin days, found the changes to be very refreshing. The long wait since the game’s announcement and growing interest in Type-Moon’s world due to the influence of their other titles may have resulted in expectations ballooning up in the years since, but somehow, it manages to not just live up to, but also exceed these expectations.

The Good: Tsukihime’s story is still great, and the remake’s changes do a good job of making it interesting for players familiar with the original as well. The presentation is also top-notch.

The Bad: The system, while serviceable, still leaves room for improvement. Some old fans might have problems stomaching some of the changes.

Conclusion: Tsukihime – A piece of blue glass moon- does a fantastic job of modernising Tsukihime, with an exceptional presentation and enough changes to make the story feel like something new to old players while retaining its identity.