Elden Ring director Miyazaki Hidetaka discussed the game in an interview in the 10 March 2022 issue of Weekly Famitsu.

The interview begins with Miyazaki being asked how he feels now that the game has been released, and he says that, like with past games, it is actually not a good feeling: While he is relieved to some degree, the amount of anxiety he feels outweighs it, and he says that he can never get used to this feeling.

Next, the interviewer asks how know-how from the Dark Souls series was applied to Elden Ring. Miyazaki says that the game is a direct evolution of the Dark Souls series, and that Elden Ring is, to begin with, a game that they could only make because of all the know-how they had from working on Dark Souls. This branches into many areas, but if he were to mention any in particular, it would be the combat-related systems, level design, and balancing difficulty. 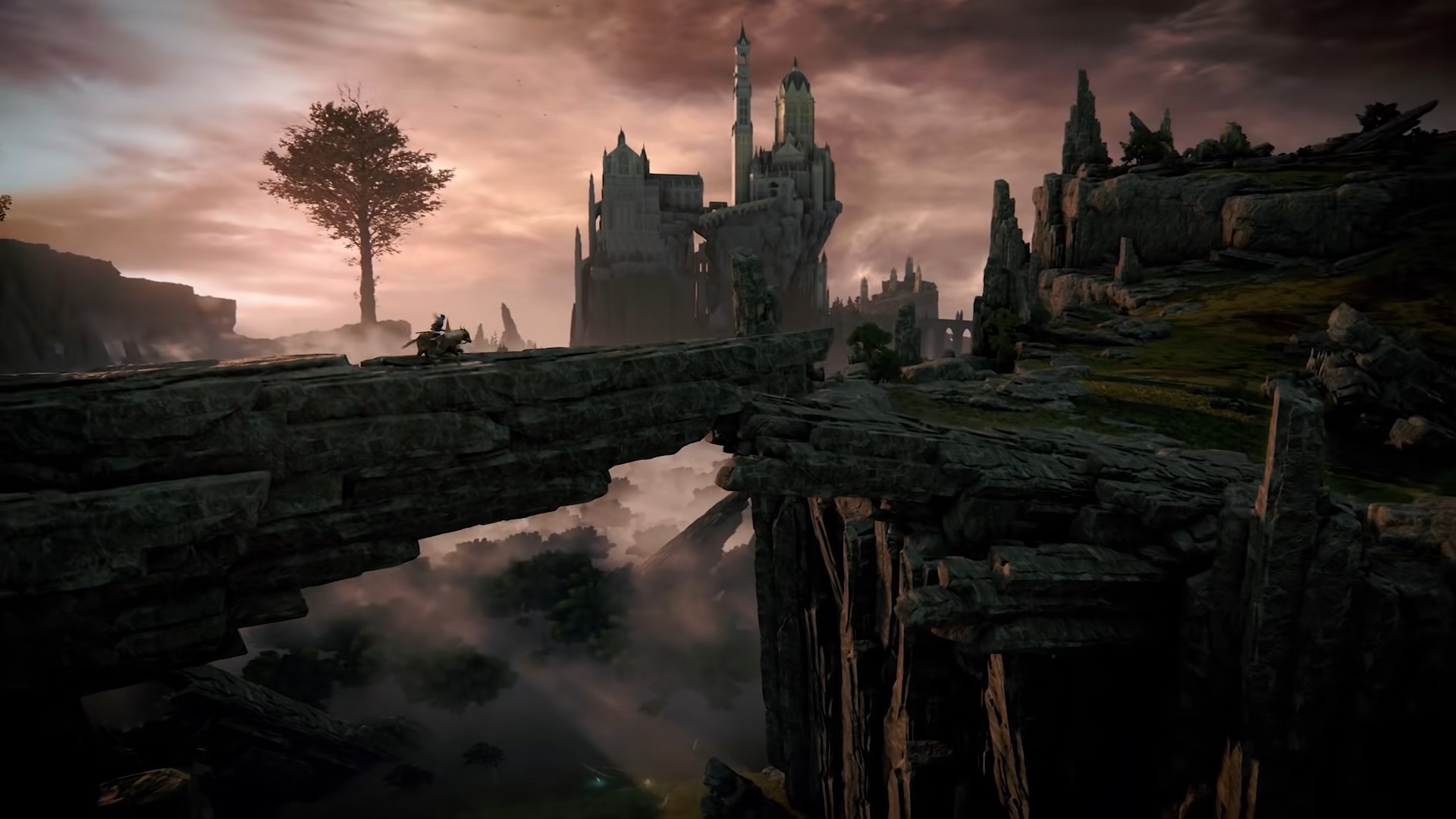 In regards to the size of the game, which is greater than any of their previous titles, Miyazaki says that they started work on the game with the intention to make it their largest game. The primary reason for them choosing to do so at this time is because the staff at From Software have grown and there are now more excellent members that can be entrusted with various things. That being said, the game did end up being even larger and more complex than initially planned, but the staff were able to live up to expectations and handle the development.

When asked if he had any trouble as director of a game of this size, Miyazaki says that compared to previous titles, he did have to delegate things to others more than usual. As such, when directing things, he took care to not just tell others how things should be concluded, but also share his logic, philosophies, and thought processes as well.

The interviewer comments on how they felt that Elden Ring was influenced by Sekiro to some degree, and Miyazaki says that he actually feels that there is not a lot of direct feedback from Sekiro, as the two titles were being worked on at the same time. As he was director on both games, though, there is of course some influence on each other. 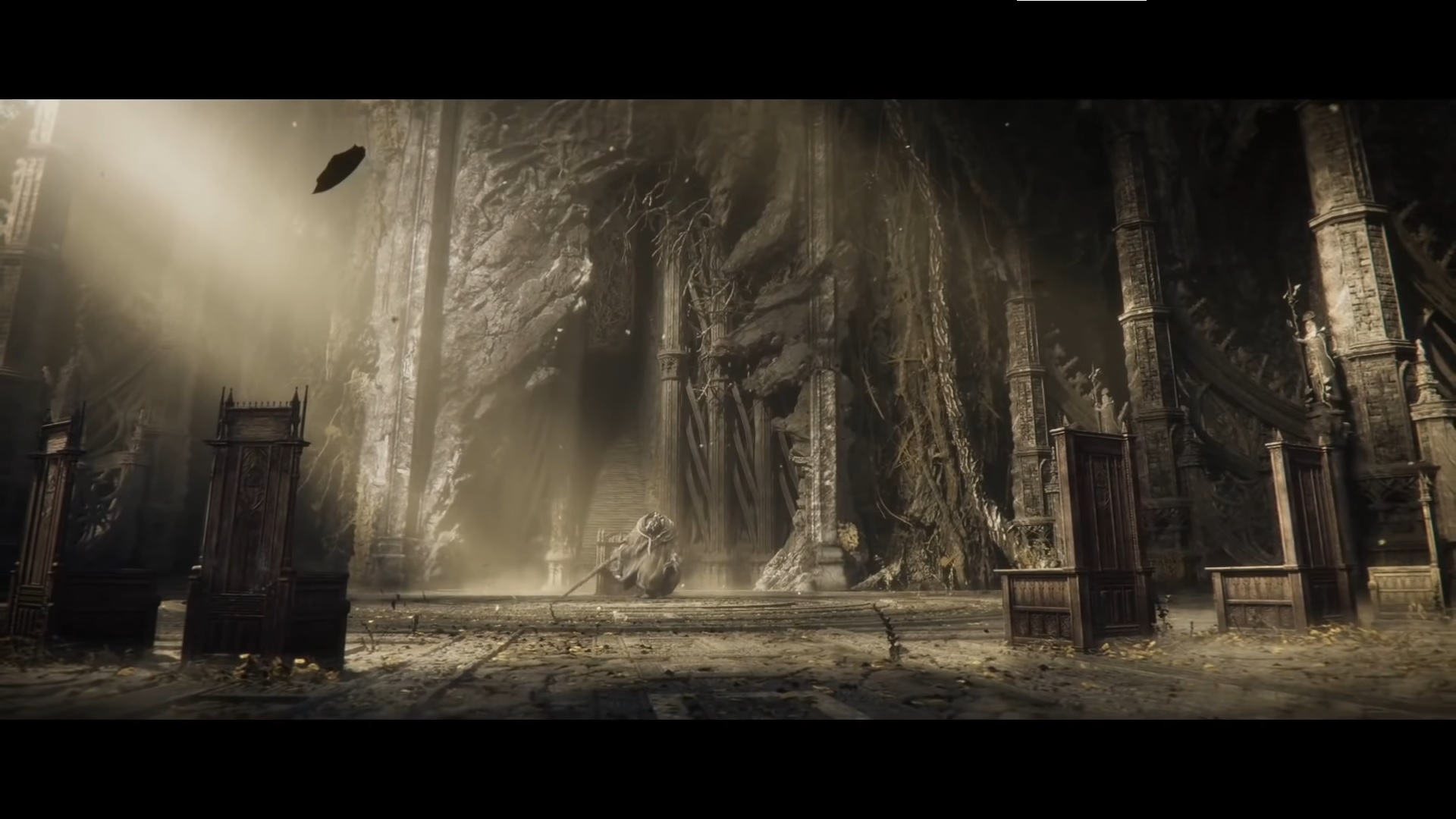 George R. R. Martin’s involvement in making a mythos to form the base of Elden Ring’s world is brought up, and the interviewer asks how this influenced the game. Miyazaki says that the mythos existed from an early stage of development, and was filled not just with wondrous things but also complicated and interesting interpersonal relationships. This gave the things in the world the depth and weight of history, which can be seen in things like the designs of important enemies, the map, and the NPCs.

Miyazaki is asked how much Martin was involved in coming up with things, and how much was given to him by From to begin with, and he says that they presented him with the idea of something like the Elden Ring, which was not a ring at that point, and its shattering being the focal point. They only gave him abstract concepts, however, and things like the Erdtree did not exist at that point.

Regarding the method of storytelling in Elden Ring, Miyazaki says that it remains the same as in the Dark Souls series, with fragments of information in the text, with the intention being for players to piece them together or imagine what happened themselves. The primary reason is that they want the gameplay itself to be the players’ stories. That being said, Miyazaki thinks that dialogue from NPCs is more straightforward than before, and he says that this is because they are there to give the player meaning, directions, and clues in exploring the vast world. He thinks this could be an example of influence from Sekiro. 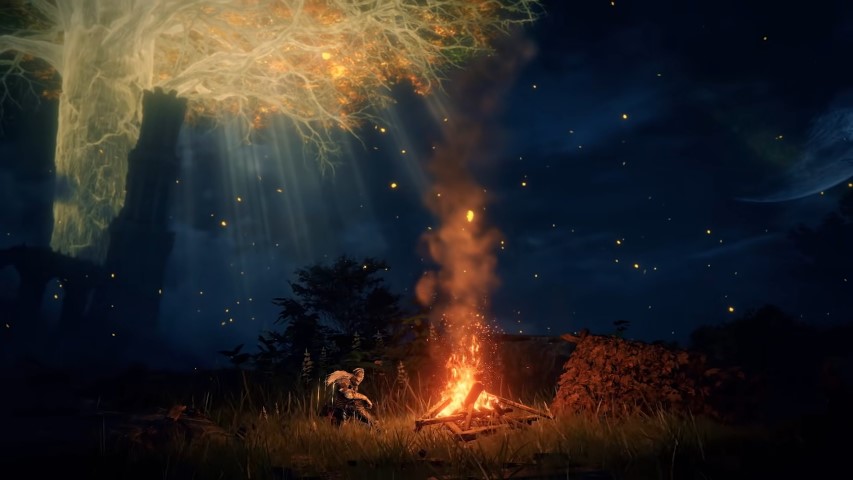 Next, the interviewer brings up how the Erdtree is an important motif to the world of Elden Ring, and asks what meaning it has in the game. Miyazaki says that the Erdtree’s first purpose is to represent the visuals of the game, showing that it is a mythological world, and to make it easy for anyone to identify the game as Elden Ring with a quick glance at the screen. Gameplay-wise, it can be seen from almost anyway outdoors and thus serves as a landmark. It is also important to the story as a representation of the Elden Ring itself, which the story revolves around.

Miyazaki explains some of the setting and story: After the Elden Ring was shattered, the demigods who obtained the Great Runes, which are shards of the Elden Ring, went to war against each other in the Shattering War, with the objective of becoming the Elden Lord. As for what happens when someone actually becomes the Elden Lord, that is something for players to see for themselves in the game.

The people who live in the Lands Between have a golden glow in their eyes from the grace of the Erdtree. Some people, however, lost that glow, and they were called the Tarnished and exiled from the Lands Between. The player character and the other Tarnished who appear in the game are the descendants of such people. After the Elden Ring was shattered, the guidance of grace appeared to the Tarnished and others who could not die, telling them to return to the Lands Between, gain audience with the Elden Ring, and become the Elden Lord, and that is how the game begins. The player character is not the only Tarnished to receive guidance, and there are many others also seeking to become the Elden Lord.

The interviewer points out the similarities in the theme of loss between Elden Ring and the Dark Souls series’ protagonists, and asks if there is anything that makes Elden Ring’s significantly different from previous ones. Miyazaki says that this would be the guidance of grace: In Elden Ring, there is clearly something trying to guide the protagonist, and that is something they have to deal with. As for similarities between Melina and the Fire Keepers of Dark Souls, Miyazaki says that Melina has different nuances to her character: She is a partner on the same level of the protagonist, and that is why she was designed to show her face instead of hiding it to emphasize mysteriousness like the Fire Keepers.

The interviewer also inquires about the existence of churches in Elden Ring, and asks what role religion has in its world. Miyazaki says that the churches seen in the Lands Between are dedicated to Erdtree worship, because that was the common ruling religion of the land. Other religions do exist, however: Some that predate the Erdtree religion, and some that came after its decline.

Moving on to the field design of the game, Miyazaki says that the aim was to give the world a mythological, fantastical, painting-like look, with a feeling of romanticism in solitude. Freedom was a high priority, and so the game is designed to let players allow to go to different areas in whatever order they like to some degree, and there are very few places where progress is completely blocked by a boss. 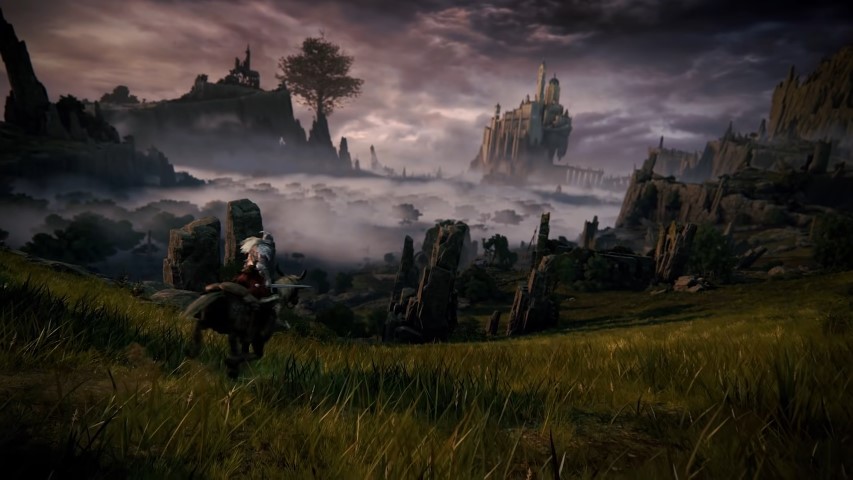 Regarding the horse, Miyazaki says that they felt that if one were to explore a vast fantasy world, a horse would absolutely be necessary. As a function, they prioritized using the horse to make exploration more convenient, not just with speed but also with three dimensional movement such as with the double jump and spiritsprings. As such, there is more emphasis on it being an action game than on realism in the horse-riding, and they did not implement elements such as the horse refusing to listen to the player. They balanced the game to make summoning and mounting and dismounting while running feel good, and the idea of it being a spectral steed that appears when needed and disappears when not was also made to contribute to reduce stress and make it convenient.

As for the system where the player collects map fragments to reveal parts of the map gradually, Miyazaki says this was implemented because they wanted to have some variation to how exploration feels: Having the feeling of exploring a completely unknown area before obtaining a map fragment, and exploring a place with some idea of what is around with one. The map fragments of course do not have all the details on them, so they do not take away the fun of discovering new things. While it is possible to clear the game without obtaining any map fragments, Miyazaki says that exploring with a map is fun, and that is why they made them easy to obtain.