Elden Ring director Miyazaki Hidetaka discussed the game in an interview in the 10 March 2022 issue of Weekly Famitsu.

Miyazaki is asked about the crafting system, specifically why it was implemented, and he says that they wanted to keep tension steady while also letting players go on longer. The size of the field means that having to turn back upon running out of items leads to more stress than before, and they wanted to reduce the chances of that happening. Flask charges being restored when defeating groups of enemies and certain scarab types came from this same philosophy. 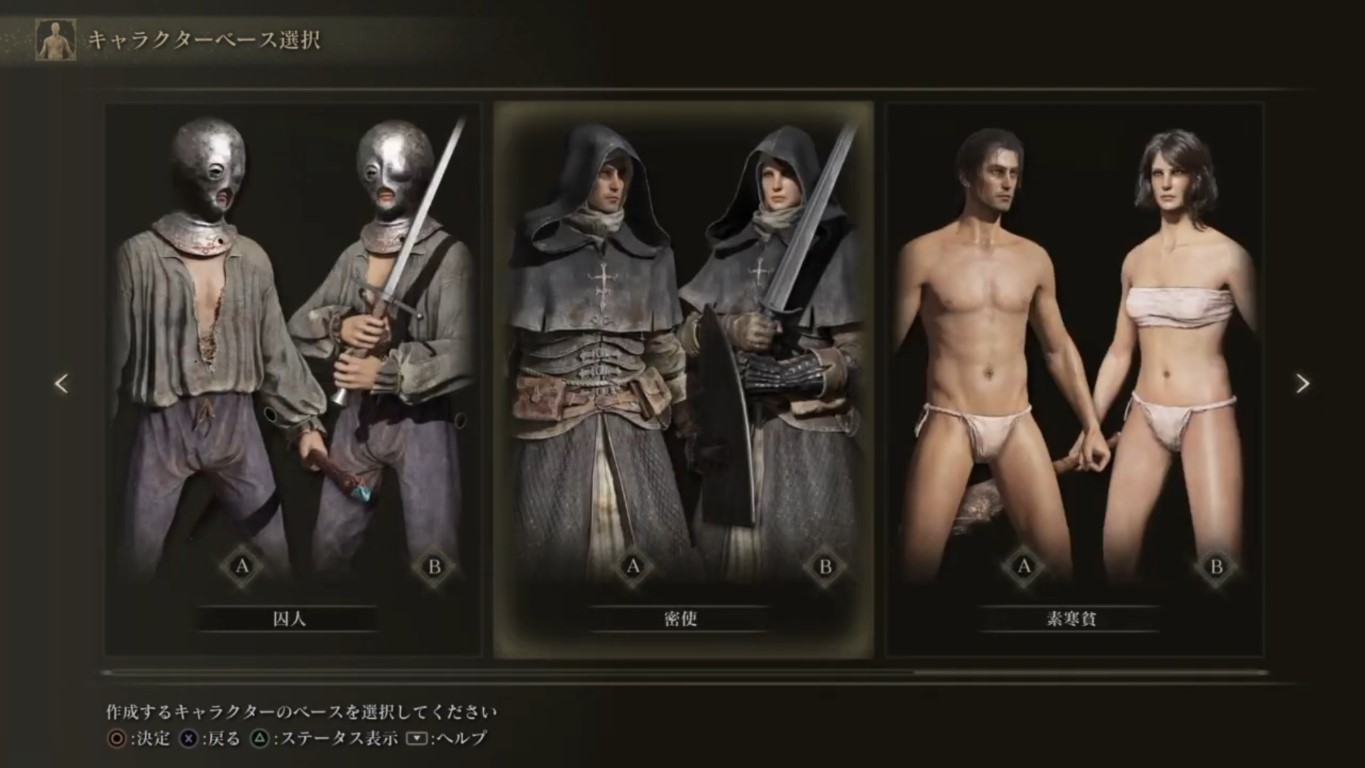 Next, the interviewer mentions how there are 10 different starting character classes in Elden Ring, and asks what players should do if they are not sure which to go with. Miyazaki thinks that players can just choose freely if they like the background or appearances of the class, as the game is designed so that the player is not limited by the choice in the future. For example, a player who starts as a knight can become a sorceror later on, and he thinks that doing so would give that character its own drama. He does note, however, that Wretch is not a class one should choose if not sure which to go with.

Regarding the guidance of grace, Miyazaki says that it was implemented so that players would not be unsure of where to go to progress in the main story, and that exclusively following it would give a player the bare minimum. Elden Ring has a high level of freedom, and the guidance is only there so that the freedom players do not get stressed out with freedom of choice where they do not know what to do next. He also says that refusing to follow the guidance is supposed to in itself feel like a choice.

The interviewer next brings up how observation has more of a role in Elden Ring, with gimmicks like the birdseye telescope being introduced, and Miyazaki says that there are more chances of the player finding enemies first in the field. With that as a condition, they designed combat to have players think about how to go about defeating enemies, such as considering going after lookouts with trumpets first. Elements such as stealth and summoning spirits were also introduced with this in mind. 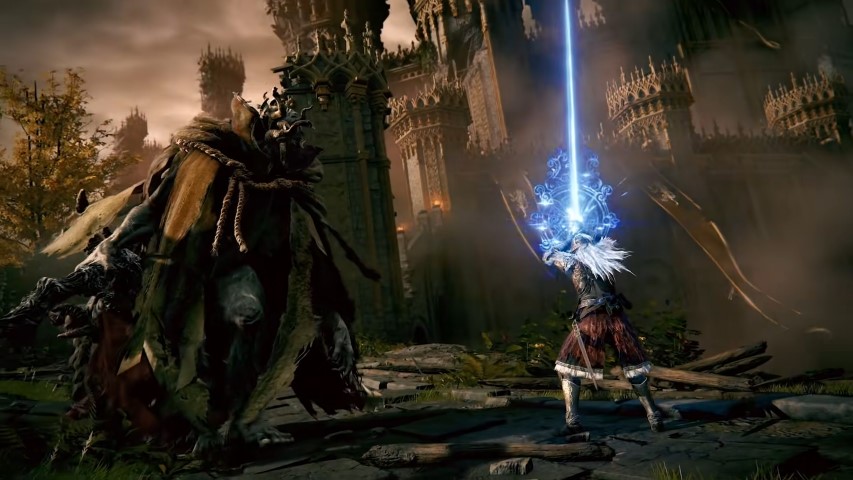 Magic being split into just sorcery and incantations is discussed next. Miyazaki says that they initially planned to have them divided into more types, with corresponding catalysts, but splitting them up resulted in limitation on character builds, and so things ended up as they are now. As such, sorcery and incantations each also have their own sub-classes, which can be boosted by certain catalysts, and some require different types of stats. He says that there is a wide range of potential for roleplaying in magic builds in Elden Ring, and hopes players enjoy it.

As for skills, the interviewer says that they look more impressive this time, and Miyazaki says that while they did not start with the intent of making them look fancier, the skills, sorceries, incantations and weapons were created with the idea that they are things from mythology, or made to go up against the heroes of mythology, and they ended up looking how they are as a result of that.

The interviewer asks if the variety of weapons available in the game means that it was difficult for them to have differentiation between the weapons, and if they had any philosophies on how weapons should be. Miyazaki says that they explicitly did not set rules for how weapons should be made, as that would limit ideas and they wanted to avoid becoming overly conservative. One thing that they keep in mind, however, was that they would all be serious: No matter how weird or bizarre a weapon or move might look at first glance, they are serious in putting their lives on the line to defeat the enemy. He also says that they focused on roleplaying potential when designing the armor in the game, while keeping in mind to have it fit Elden Ring’s world.

Miyazaki talks about stance breaking next, saying that it came from the idea that they wanted to give the melee combat from the Dark Souls series more depth, and guard counters and jump attacks having synergy with this system. As for spirit summoning, he says that there is a wide range for potential with the system: Players can simply choose spirits for their tactical advantage over enemies depending on the situation, or they can choose to just fight alongside a spirit that they like. There is also a collection aspect to them, and as an element that Miyazaki is personally fond of, he hopes that players enjoy it. 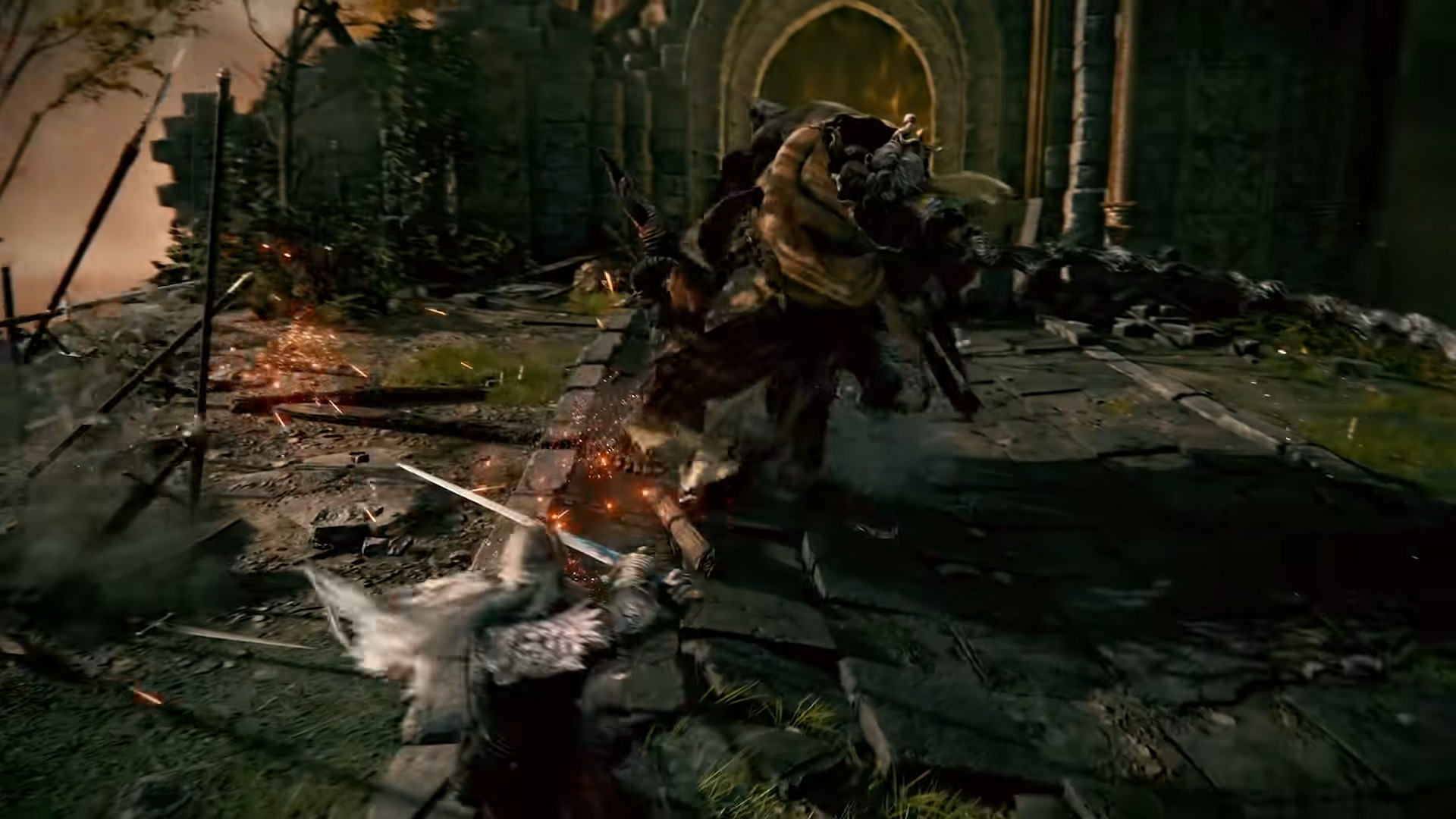 Going back to the skill system and the ashes of war system which allows players to equip skills on different weapons, Miyazaki says once again that with skills, they prioritized having the feeling of having them as things to depict things out of mythology over just having them balance weapons gameplay-wise. Applying the big theme of “freedom” to them resulted in the ashes of war. Players now have much greater freedom in customizing weapons, and he hopes they enjoy it.

The interviewer asks Miyazaki what sort of playstyle he personally uses, and he says that he prefers using “tough” characters that can trade hits and press the advantage when needed. Elden Ring has a far wider range for roleplaying and builds, however, and he is still testing new styles, and he says he has a feeling he might find something else that he likes later. 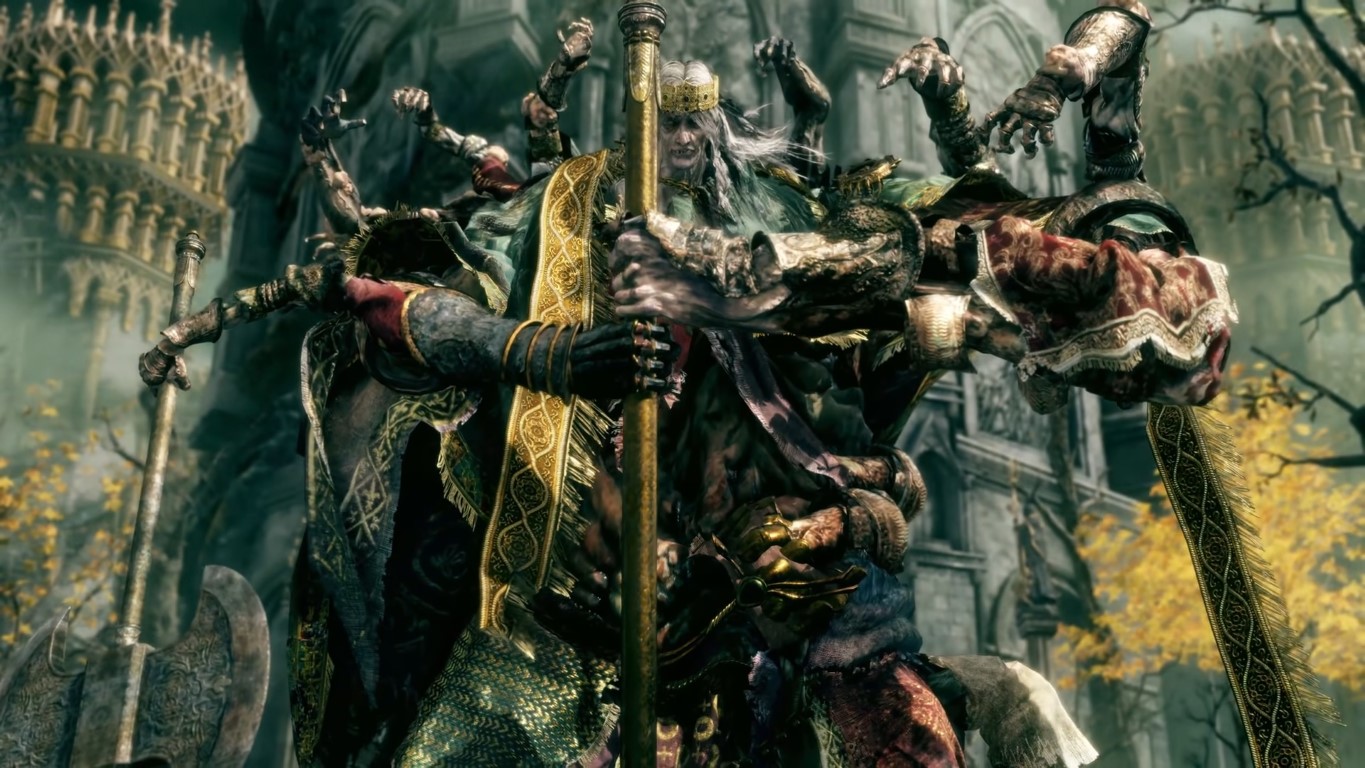 Miyazaki next talks about the demigod designs, saying that something that a shared concept they have is being “heroic”. “Heroic” is, however, interpreted in a broad way, and includes cases of once-heroes who have lost, fallen, and warped into something malformed. Gameplay-wise, when designing bosses, they aimed to make bosses put pressure on the player and feel threatening, while not being unreasonable. Combined with the difficulty derived from parameters, this results in enemies that feel like huge threats, that result in players feeling great joy and relief when they manage to defeat them.

It is brought up how Miyazaki mentioned in previous interviews that they made multiplayer easier to participate in, and he says that making it harder to participate in felt inappropriate in terms of the context of the theme of “freedom”, and as a method to overcome hardship. Regarding limiting non-synchronous features such as messages and bloodstains to within a group, which is a new feature in Elden Ring, he says he says he hopes that being able to switch the pool from the entire world to a limited group will mean players find new ways of enjoying the game. For example, previously, players writing messages would be directing those messages to someone they do not know, if anyone at all, but this new feature means that the message will probably be read by someone that they do know, which changes the motivation and meaning of the act. 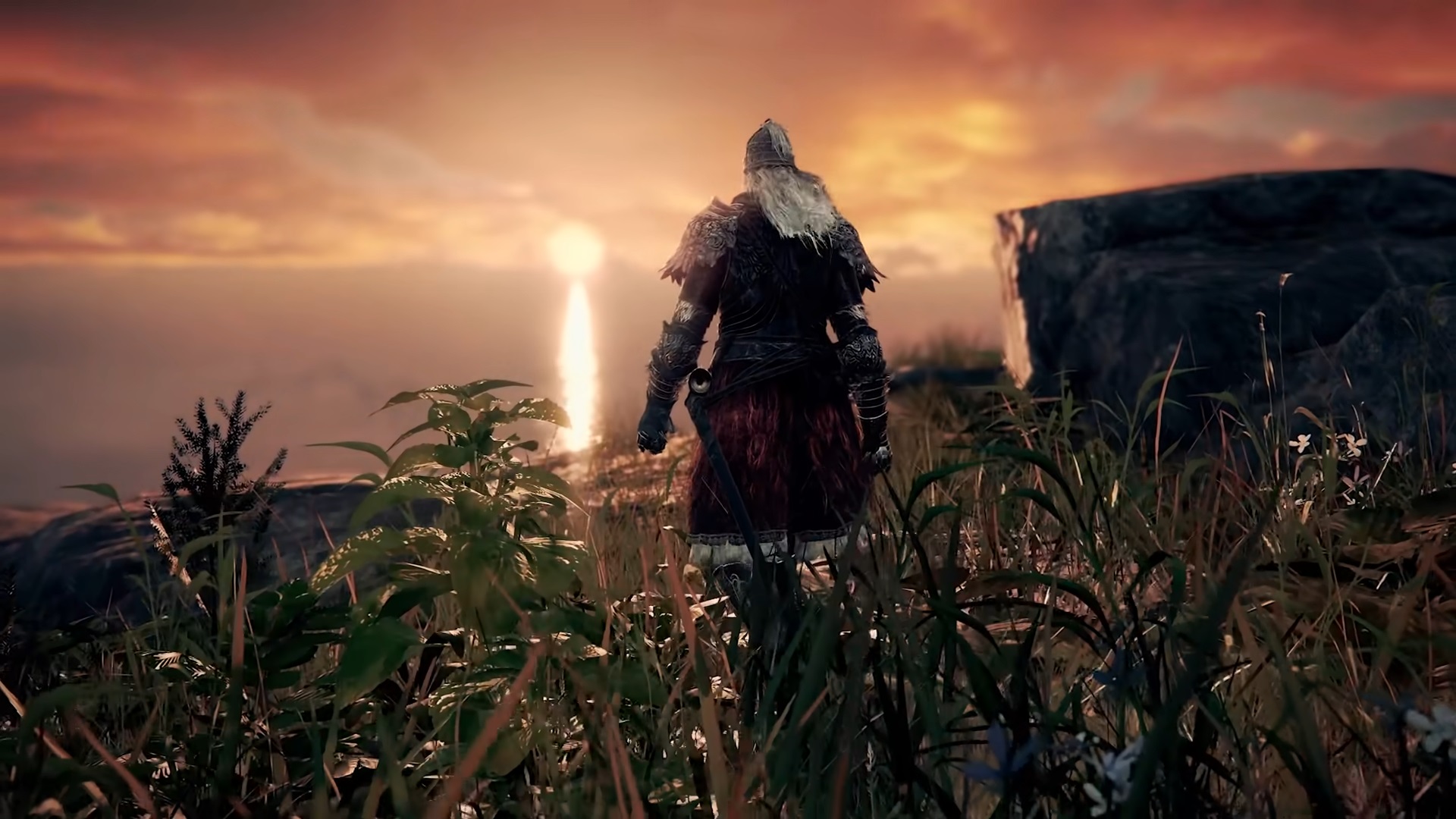 The interviewer asks Miyazaki for tips for new players on how to enjoy the game, and he says to not try to optimize things and just relax, and not fear death but enjoy the trial and error process which it is a part of: That is the way of enjoying the game that they intended. Compared to previous games like the Dark Souls series, the open field and freedom should make the game easier to get into.

Miyazaki is asked if Elden Ring will have an influence on future games by From Software and him, and he says that while he cannot be certain about the future, he thinks that it will. Elden Ring was only possible because of the growth of the development staff, and he hopes that it leads to more challenging future endeavours by them.

Finally, Miyazaki is asked for a message for players. He says that Elden Ring is straightforward, filled with a large unexplored field, threats, mysteries, meetings and drama, myth, adventures, thrilling combat, and the feeling of fulfilment from victory, and hopes that everyone enjoys it.

Dark Souls and Sekiro get new chibi figures from ACTOYS