※この記事の日本語版はこちらで読めます / This article is available in Japanese here

Now that players have had some time to get into Elden Ring, more and more people are clearing the game. According to trophies, the ending that players have chosen the most is the “Age of the Stars”, unlocked by clearing Ranni the Witch’s quest. But what does this ending entail? A lot of the dialogue is cryptic, which has left players confused and divided over what it means.

Unfortunately, it appears that the confusion is coming from a number of mistranslations and localization changes. Elden Ring’s backstory might have been written by George R. R. Martin, who of course writes in English, but what he provided was only a “backbone” for the story, and the script for the game itself is, as director Miyazaki has said himself, written by him and From Software. Though the game only has an English voiceover, this voiceover is derived from the translated version of the script, and so any mistranslations in the script would make it into the voiced dialogue as well.

With the text originally being in Japanese, it has to be translated into English, and unfortunately it seems that some mistakes were made along the way. 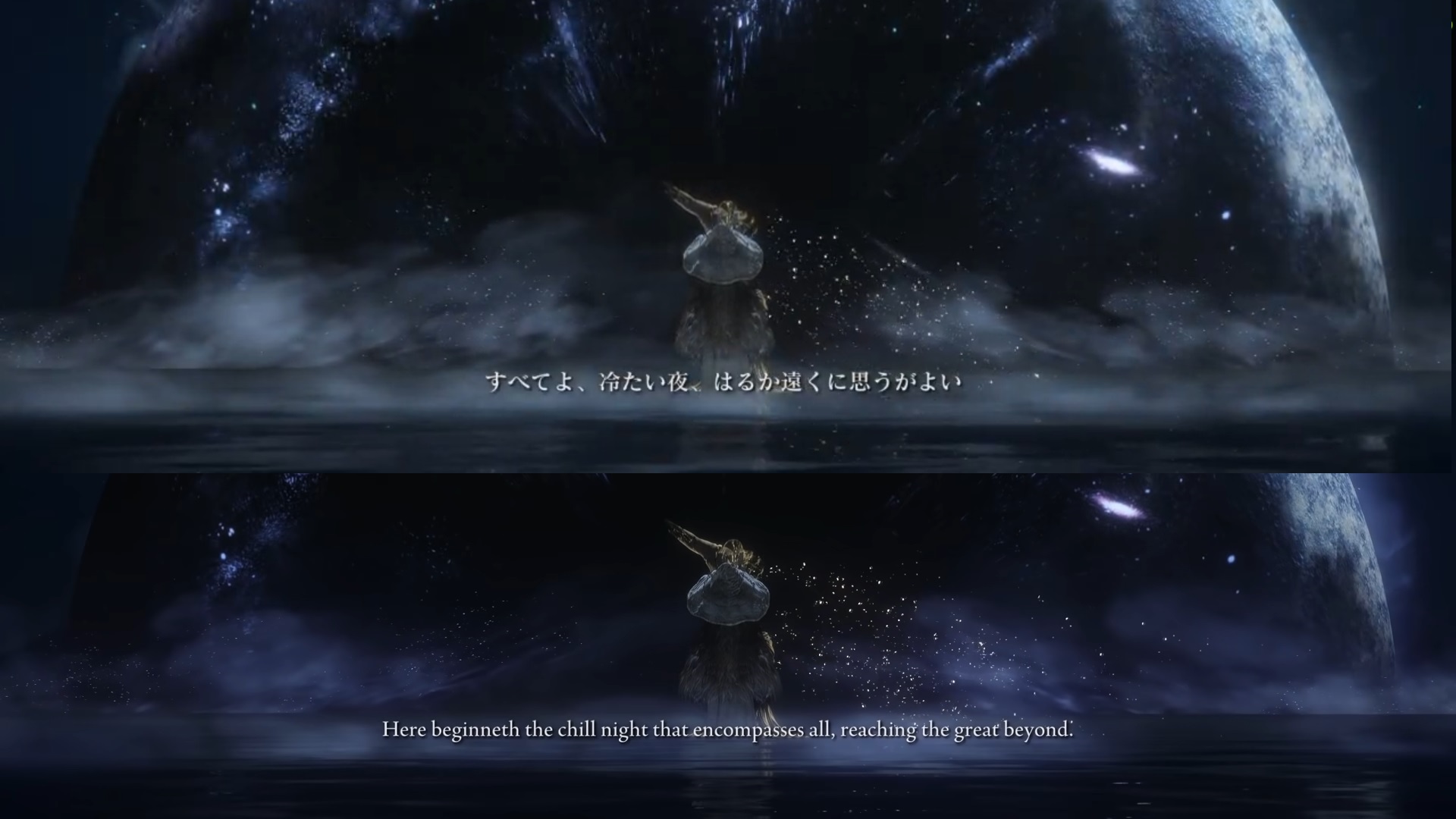 In the English version, Ranni says:

“I do solemnly swear.
To every living being, and every living soul.
Now cometh the age of the stars.
A thousand year voyage under the wisdom of the Moon.
Here beginneth the chill night that encompasses all, reaching the great beyond.
Into fear, doubt, and loneliness…
As the path stretcheth into darkness.
Well then. Shall we?”

“Here beginneth the chill night that encompasses all, reaching the great beyond”. It seems that the translator who handled this line did not understand the original line at all, and while the individual parts are correctly translated, the order of the words, and thus cause and effect and thus the entire meaning of the line have been changed.

In Japanese, the line states “to all, you may think of the chill night as infinitely far away”.

To break down the problems with the English translation of this line:

“Into fear, doubt, and loneliness… As the path stretcheth into darkness.” has also been mistranslated, erroneously being connected with the previous line, when it in fact should be connected to the following line.

As with the previous line, it seems that the translator was unable to understand Japanese sentence structure and parse the correlation between lines.

A better way to represent the Japanese dialogue would be:

私は誓おう すべての生命と、すべての魂に
“I shall swear to all lives and souls”

これよりは星の世紀
“From hereon is the Age of Stars”

月の理、千年の旅
“The laws of the moon, a thousand year journey”

すべてよ、冷たい夜、はるか遠くに思うがよい
“To all, you may think of the chill night as infinitely far away”

恐れを、迷いを、孤独を そして暗きに行く路を さあ、行こうか
“And now, let us go on our path of fear, doubt, and loneliness, into darkness”

(This is a literal translation to clarify the meaning of the Japanese dialogue: Some rewording might be prudent if it were for actual implementation into a game)

So, the original line has her not beginning a chill night, but telling everyone that the chill night will now be kept far away, and the the mention of fear, doubt and loneliness is referring to her own dark path. But what is the chill night, and what does it being far away actually mean?

The Explanation in Ranni’s Room 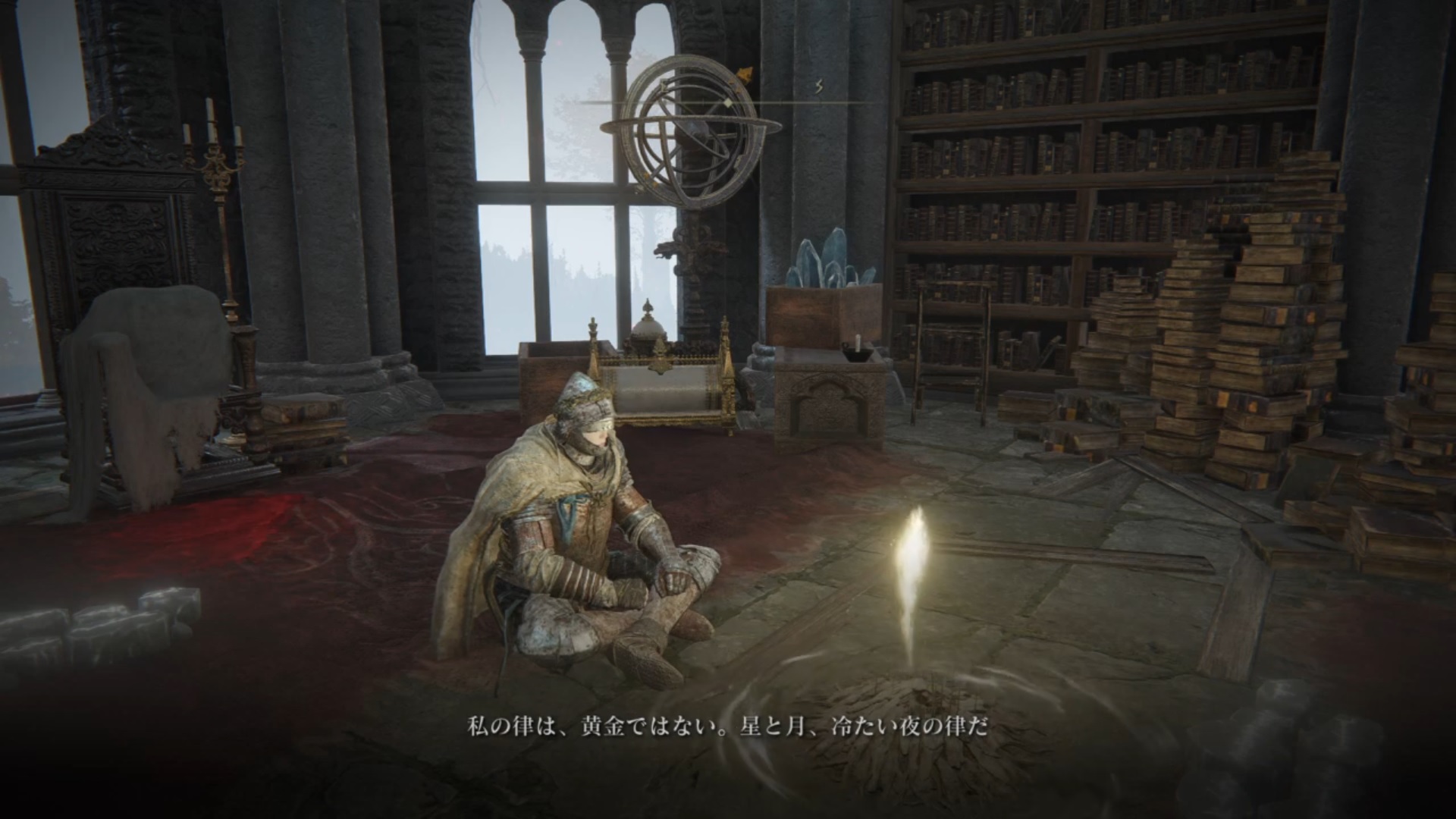 Thankfully, there is an event where, when you go to Ranni’s room and talk to the doll after clearing her quest, she clearly explains everything to you. Unfortunately, the lines here were also mistranslated.

“Upon the order I envision.
Mine will be an order not of gold, but the stars and moon of the chill night.
I would keep them far from the earth beneath our feet.
As it is now, life, and souls, and order are bound tightly together, but I would have them at a great remove.
And have the certainties of sight, emotion, faith, and touch…
All become impossibilities.
Which is why I would abandon this soil, with mine order.”

私の律は、黄金ではない。星と月、冷たい夜の律だ
“My order will not be of gold, but of the stars and moon, and chill night.”

…私はそれを、この地から遠ざけたいのだ
“…I want to keep it far away from this land.”

生命と魂が、律と共にあるとしても、それは遥かに遠くにあればよい
“…Even if life and souls are one with the order, it (the order) could be kept far away.”

確かに見ることも、感じることも、信じることも、触れることも
…すべて、できない方がよい
“If it was not possible to clearly see, feel, believe in, or touch the order… That would be better.”

だから私は、律と共に、この地を棄てる
“That is why I will leave this place, along with the order.”

(This is a literal translation to clarify the meaning of the Japanese dialogue: Some rewording might be prudent if it were for actual implementation into a game)

The “far away” here, “haruka ni tooku”, is the exact same wording used in the ending where she says the cold night will be far away. It is odd that the exact same wording used here is mostly correctly translated to “keep them far” in this instance but mistranslated so badly in the ending. (Though it is misinterpreted to refer to the stars, moon, and night, when it is referring to the order itself)

The line about having “them”, referring to life, souls and order, kept at “a great remove” suggests that Ranni is separating the three, but the original dialogue seems to suggests that it is impossible to do so, and that her choosing to keep the order far away is a compromise to deal with that.

The biggest problem with the English version is the line stating “have the certainties of sight, emotion, faith, and touch… All become impossibilities”: Players have argued that this ending erases the emotions of people for some reason. This is in fact an egregious mistranslation: The line is actually referring to the order.

The Japanese language commonly omits the subject when speaking about something when it should be easily inferred, but this frequently confuses people who are not very fluent in the language, and that seems to have been the case here. What Ranni is saying here is that it would be better if the order is not somewhere physically close by, where people can see and touch it.

Additionally, the “tashika ni” used to indicate that right now people can clearly see or feel or touch the order, a word that is not all that important in the line and could in fact be omitted entirely without changing its meaning, was misinterpreted to have undue importance, turned into “the certainties”.

Similarly, the softly-worded “dekinai hou ga yoi”, where Ranni is just saying she thinks it would be better if these could not happen, was changed into the hard “become impossibilities”. Combined, this line gave many players the impression that the ending would result in Ranni forcing people to give up their emotions.

There you have it: The explanation Ranni gives in her room makes it very clear what her ending means, while the mistranslated dialogue in the ending gives many players a completely wrong impression.

Ranni believes that while the order may have to exist, as it is entwined with life and souls, it causes problems for the people. Her solution is thus to take it and leave, keeping it far away, where people cannot see, feel, touch, and believe in it, embarking on a journey into fear, doubt, solitude and darkness to do so.

Elden Ring director Miyazaki has stated that he feels that NPC dialogue in the game is more straightforward than before, and having an ending explained so clearly is in fact quite unprecedented for Dark Souls games. It is thus quite unfortunate that the English version went to such measures to twist and warp what would otherwise be such a clear explanation.

This article was updated on 3/20 to add further clarifications