Digital Games Expo 2022 was held in Akihabara UDX on 13th November 2022. Digital Games Expo, which is also known by its Japanese name “Dejige Haku” is an event dedicated to indie and “doujin” games.

Digital Games Expo 2022 was the tenth time this annual event was held since 2013, and had over 200 participating entities – Companies, “doujin circle” hobbyist groups, and individuals.

While doujin games used to be exclusive to PC, the ease of development in recent years has resulted in more diversity in platforms, and we saw games for PC, iOS and Android, retro game consoles, and VR.

Due to the sheer number of participants, it would be hard to cover all of them, and so we are only able to show off a fraction here: Anyone who is interested in seeing more should check out the complete list of participants available on the official website.

Desunoya had a playable demo of the roguelike action RPG Lys and Ruka’s Magical Bag (available on Steam in English). The game’s primary gimmick comes from being able to power up equipment by lining up duplicates, and using a special item to combine different types. For example, combining two different kinds of magic will result in a spell that fires off both types of magic at the same time, and combining a sword and dagger will let the player swing both weapons at the same time.

VV-Labo had a playable demo of Super UFO Fighter (available on Switch and Steam) on display. Super UFO Fighter is a 1 on 1 action game in which the player takes control of a UFO and competes against another UFO to collect target items and deposit them in their own goal. Players can impede each other, and a variety of stage gimmicks make sure that matches stay exciting.

Studio Warehuman had a playable demo of the RPG/visual novel Warehuman, slated for a 2024 release on Steam, on display. The story is primarily about the discrimination against a race of demi-humans, and has the player make difficult choices.

LAILA had the visual novel Archivist: Outside the Cage on display. Archivist is set to be a multi-part series, with Outside the Cage, a sci-fi suspense story about a girl with prosopagnosia investigating the death of her father, being the first part.

D10RAMA, a doujin circle that makes free games, had two visual novels, Ame ni shite Hito wo Hazure and Mienai Nitousei on display. The former is available on Steam, while the latter is currently only available in Japanese and can be obtained from Novelgame.jp or Freem.ne.jp.

Nijiiro Works/STC Works, which makes visual novels, had three past games, ALLiWs, Tasogare Wiz, and BluePrints on display and for sale.

ZephyrStudio had Monmusu Gladiator, which is available on Switch and Steam, and upcoming game Runa in Nightmare House (slated for a 2023 Steam release) on display.

Project ICKX is a doujin circle that specializes in Ace Combat-style flight action games. Their game Vertical Strike: Endless Challenge, which allows the player to pull off all sorts of crazy post stall maneuvers, is available in English on multiple platforms such as Steam, and their classic sci-fi flight action game EFFY is due to be released on Steam in the near future as well. This time, they teamed up with Aims Co., Ltd. to implement an entire cockpit allowing the player to fly around Mount Fuji.

Electriar Labo had the game Electriar Code, which is available on iOS and Android, on display. Electriar Code has a similar world to that of series like Busou Shinki and Megami Device, in which sentient action figure-sized robots exist and are pitted against each other in battles by their owners. The game is similar to the old Busou Shinki game Battle Rondo (which closed down in 2012), with the player customizing their robot but not actually controlling it in battle: In Electriar Code, fighting is completely automated based on the loadout and AI settings, which keeps in line with the setting. There is a massive range of customization options in the game, and Electriar Labo had a massive number of printouts of user submissions of their robots to look at as well.

GameImpact/Habit Soft creates new games for retro platforms like the MSX, and Sega Game Gear, and had a wide array of titles on display.

ZERO PLANT had a playable demo of action game MetalFort, in which the player takes control of a spider-like tank that can jump and walk on walls, on display.

MachineClad, an Armored Core-like game, had a playable demo on display at the event in which the player chooses from several pre-built robots and defends a base against several waves of enemies before facing off against a powerful boss.

Kawaguchi Mokumoku Kai had a playable demo of the game Outen Kokka, a simulation game with a Three Kingdoms setting in which Shu has unified China, Liu Bei, Guan Yu, Zhang Fei and Zhuge Liang are all alive and present, and Liu Bei is now emperor. The player controls emperor Liu Bei as he makes decisions regarding all sorts of matters, trying to balance various statistics and thus keep the country stable.

INSIDE SYSTEM had the Dark Witch series, which consists of several RPG and action games, on display. Featured prominently was their latest game, the RPG Brave Dungeon, which is currently available in English on Steam (early access).

SWORD’S had the third game in the Eternity Sword series, Yuukyuu no Euphoria on display. Series creator and writer Takase Naofumi is working on the game, with the rights to the series obtained by SWORD’S after Xuse closed its doors in 2021.

Inti Creates, which is one of the event’s sponsors, was of course also present, with playable demos of Azure Striker Gunvolt 3 and GrimGuardians: Demon Purge on display. 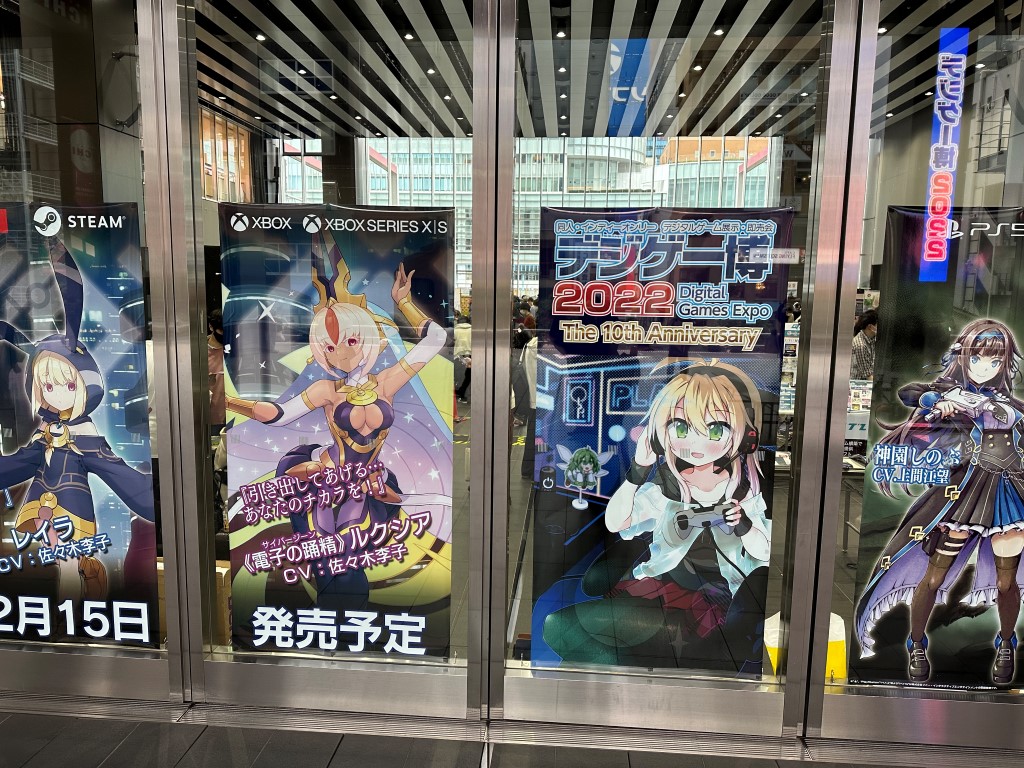 As always, the Digital Games Expo was filled with passionate developers who clearly love working on games, and even a quick glance yields all sorts of unique and fascinating games.

As stated before, the sheer number of participants means that this article is only able to show off a small fraction of what was available at the event: Anyone whose interest was piqued by the snippets here should definitely check out the complete list of participants available on the official website.